Ajay Devgn And Riteish Deshmukh Get Specially Thanked In ‘Pushpa’; Here’s Why! 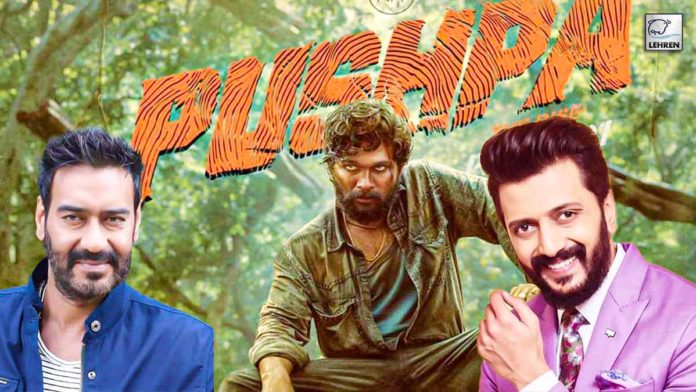 Allu Arjun’s entertainer blockbuster ‘Pushpa- the rise part 1’ was released yesterday and the makers were grateful for two of the Bollywood actors, scroll down to read why!

“Pushpa” was released yesterday and fans already are all praises for the movie’s brilliant storyline and Allu Arjun’s excellent performance. What struck the audience’s attention was the opening disclaimer that mentioned Ajay and Ritiesh’s names. Apparently, Ajay had taken to his Twitter few days back to wish the actor from the south for his upcoming film, ‘most powerful’ tweeted Ajay and wished Allu good luck with the film.

As a reply to Ajay’s tweet Allu replied, “Thank you very much, Ajay Ji ! Very nice of you to Launch #Pushpa Trailer . Very humbled by the gesture . Looking forward to seeing you in #RRR” replied the humbled actor.

Riteish Deshmukh too had supported the film by unveiling the first teaser of the film on his Twitter handle. Actually, the team of “Pushpa” had reached out to the respective actors to promote the film’s Hindi version and both the actors were more than happy to lend their support. In return for this sweet gesture, the actors were mentioned in the movie.

In recent times, Allu Arjun has been supportive of the efforts of Bollywood in bringing back viewers in most states. In October, he wished the team of Sooryavanshi, which starred Ajay Devgn in a dynamic role, all the best. 2 days ago, at the press conference in Mumbai, he congratulated “Sooryavanshi’s” makers as they succeeded in getting viewers back to cinemas. Ajay and everyone else in the film was touched by Allu Arjun’s words and the way he cares for the cinema business. Hence, it’s no surprise that Ajay got instantly ready to share “Pushpa: The Rise – Part 01’s trailer” an insider source revealed.

The movie revolves around Pushpa Raj, a truck driver and a smuggler who trades red sanders smuggling in the Seshachalam Hills of the Rayalaseema region of Andhra Pradesh state in India.