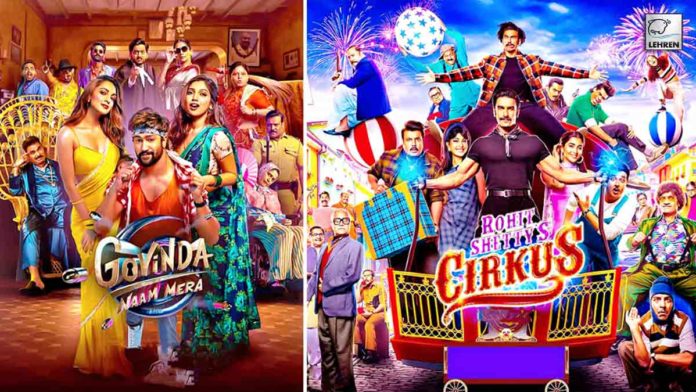 The year 2022 saw some hits and flops at the box office. As we near the end and the start of the new year last month December brings some potential viewing options. From Vicky Kaushal’s Govinda Naam Mera to Kartik Aaryan’s Freddy take a look at some of the interesting upcoming movies releasing in December 2022.

Govinda Naam Mera is a comedy thriller that revolves around a struggling choreographer Govinda Waghmare. The comic entertainer is written and directed by Shashank Khaitan. The film stars Vicky Kaushal, Kiara Advani, and Bhumi Pednekar in the lead roles. It is bankrolled by Karan Johar under the banners of Dharma Productions. The much-awaited film of Vicky will release on December 16, 2022, on Disney+ Hotstar.

Madhur Bhandar’s India Lockdown throws light on all the people whose lives were affected during the initial phase of the Covid-19 pandemic in India. The film will depict the story of the lockdown that took place in India in 2020 due to the global pandemic Covid 19. It stars Prateik Babbar, Sai Tamhankar, Shweta Basu Prasad, Aahana Kumra, and Prakash Belawadi in leading roles. India Lockdown will stream on Zee5 from 2nd December.

Kartik Aaryan will play a dentist in Freddy which is most talked for its gripping storyline. The film is touted as a romantic thriller helmed by Shashank Ghosh. As lead actors, Jawaani Jaaneman fame Alaya F is roped opposite Kartik Aaryan. Freddy will skip theatrical release and will premiere on Disney+ Hotstar on December 2.

Cirkus is a retro comedy starring Ranveer Singh in a dual role. The period comedy film is based on the 1982 Hindi film Angoor which itself is a remake of Do Dooni Chaar (1968). Helmed by Rohit Shetty, the ensemble cast includes Jacqueline Fernandez, Pooja Hedge, and Varun Sharma among others. Cirkus is scheduled to release in theaters on 23rd December.

Salaam Venky is centered around a true story of a woman and the challenges she faces in life. This project is a collaboration of Revathi and Kajol to tell the story of a praiseworthy mother, who battled the most difficult circumstances. This family drama is set to release in theaters on 9th December 2022.

An Action Hero is a quirky cat-and-mouse chase between the hero and the commoner when unknowingly a murder crime has been committed.  Helmed by Anirudh Iyer the film also stars Jaideep Ahlawat in the lead role. The actioner flick will release in theaters on 2nd December 2022.

Qala is the debut film of late actor Irrfan Khan’s son Babil Khan. It is a horror thriller drama helmed by Anvitaa Dutt. It features Babil Khan, Tripti Dimri, and Swastika Mukherjee in lead roles. The film set in the background of the 1940s in Kolkata is a heartbreaking story about a daughter who craves her mother’s love. Qala will release on Netflix on 1st December.

Blurr is a horror thriller film starring Taapsee Pannu along with Gulshan Devaiah. Pannu plays the role of a blind woman who is out to find the killers of her twin sister. Helmed by Ajay Bahl this is the actor’s first project as a producer. The film is scheduled to release on Zee 5 on 9th December.

Also Read: Prateik Babbar Was In Tears After Reading Script Of India Lockdown