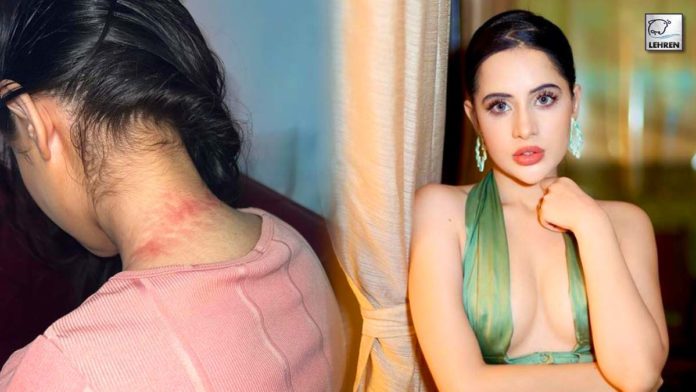 A noose around the neck with deep bruises, the shocking picture of Urfi Javed is going viral claiming that she has attempted suicide.

A picture of Urfi Javed is circulating online that showcases her bruised neck with a noose. The picture is being shared claiming that Urfi Javed attempted suicide and hung herself. “Rip Urfi Javed a big loss for no anyone (sic),” is written over the photo along with ‘1997-2022’. The troller also wrote, “Stand with urfi’s murderer.”

Urfi, who is very much alive and kicking, has called out this fake image being shared online. She not only rubbished the rumours of her death, but also called out people who wish bad for her.

Urfi, who was aghast to read such mean comments, shared the screenshot and wrote, “What is happening in This world? I’m been receiving so many death threats and now this! The comment says they stand with my murderer! Insane (sic).”

The viral picture features Urfi with a bruised neck, but the noose has been morphed into it. The actress had actually shared the picture on her social media to reveal how tough it was to wear a dress made of heavy chains. Sharing the pictures, she wrote, “Throwback !! Swipe right to see the after effects.”

However, some trolls used her pictures for the wrong purposes which left the actress in deep shock.

Urfi, however, tries to ignore the negativity and has moved on to be her own self. This morning, she shared a new Instagram reel with a message that reads, ‘Be Yourself.