Urfi Javed Stuns Netizens With Her New Dress Made Of Razor, Take A Look 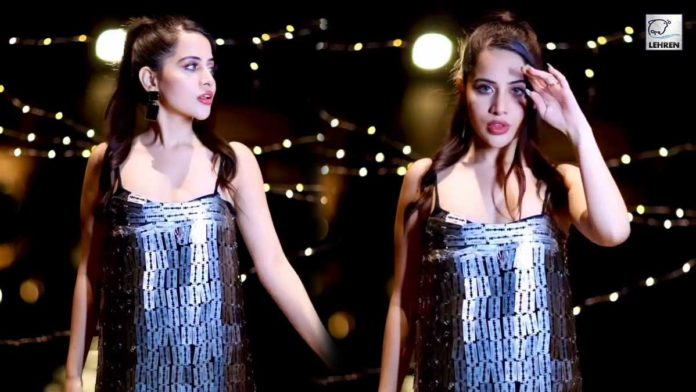 Urfi Javed shares her new video wearing a dress made out of 'Razor Blades' only. Netizens react to the video calling it 'risky and dangerous.

It is certainly not new to the netizens to be amazed by Urfi’s dresses anymore, however, the actress proved everyone wrong with her very new addition to her videos as she made a dress of razor blades. Yes, you read it right, ‘Razor Blades’, take a look at how netizens reacted to her video.

Urfi Javed Wears A Dress Made Of ‘Razor Blades’

Love her or hate her but you can’t ignore her, Urfi Javed surely is among the name on the list who never fails to surprise her fans with her exceptionally unique dresses. The actress is known among her fans for her sartorial picks and DIY Instagram videos which she makes every now and then. However, this time the actress came up with a very unique style as she covered herself with a dress made of razor blades only. Take a look-

In the video Urfi could be seen wearing a grey dress made out of razors. Sharing the video she wrote, “I made the perfect dress for introverts. Razor cut! Made this dress from razors ! I I can’t thank my team enough for helping me with my crazy ideas !”.

However, this is definitely not the first time that she managed to pull off some awfully dangerous looks, as earlier she was seen wearing a dress made of glass and chains which later left bruises and cuts on her body. For her experiment, the actress was brutally trolled and criticized by the netizens as well. Reacting to this she recently said, “Everyone likes to dress up, put on make-up and look their best. Whatever I do, I do for myself because all of us want to look and feel good. And if people get provoked by a dress, then there is a problem there… they need help!”.

However, the actress was recently praised by Ranveer Singh for her dressing sense on Koffee With Karan as the actor called her a ‘fashion icon’, reacting to which she recently said, ” I couldn’t believe it that Ranveer Singh called me a fashion icon. I was watching a movie and suddenly I got a lot of calls from everyone. They started asking me if I watched Koffee With Karan’s episode and started sending me its episode. Then my sister called me and asked if I watched the episode. I said no, so she told me that Ranveer Singh called you a ‘fashion icon’.”

Urfi currently enjoys over 3 million followers on Instagram. Recently, she was in the news as she has beaten many celebrities like Kangana Ranaut, Kiara Advani, and even the Baahubali actor Prabhas in the list of Google Top 100 Most Searched Asians. Urfi has attained the 57th spot surpassing major B-town actors.