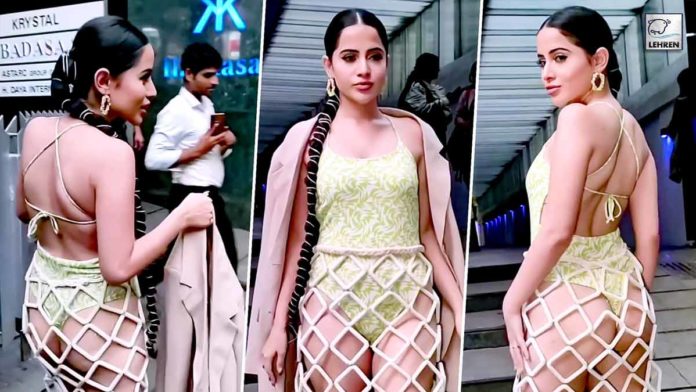 Urfi Javed shocks everyone as she flashes her bottom in see-through skirt during her recent outing.

It’s the monsoon season but Urfi Javed is raising the temperature with her new quirky outfits. The internet sensation sported a monokini and wore a skirt made of rope during her recent outing. As she stepped out of her car, she flashed her bottom to the paparazzi. For a brief period, she was seen covering herself with a beige jacket on her shoulder. However, the actress unapologetically flaunted swimwear during the daytime, and she didn’t even need a swimming pool for it. People are shocked to see Urfi Javed’s bold dress in a new video.

As the video surfaced online, people criticized her for her bold look. Here’s what people are writing:

“Most third class girl i have ever seen”

However, some people have also appreciated Urfi for her confidence. An Internet user wrote, “That confidence thou”

“I cant do this ever.BUT,It is courageous and Urfi,if you love what you do,then you Go Girl!“, reads another comment.

Who is Urfi Javed?

Urfi first rose to the limelight when she participated in Bigg Boss OTT. She previously did small roles in Television serials. Urfi Javed was first seen in the 2016 TV show Bade Bhaiyya Ki Dulhania, then in Meri Durga, Bepannaah and Puncch Beat Season 2. She was also seen in Yeh Rishta Kya Kehlata Hai and Kasautii Zindagii Kay.

After coming out of Bigg Boss house, she garnered attention by wearing quirky outfits and making public appearances. She is popular on social media for her videos of DIY outfits which exude boldness. She is currently seen in music videos and earns a hefty amount for endorsements.