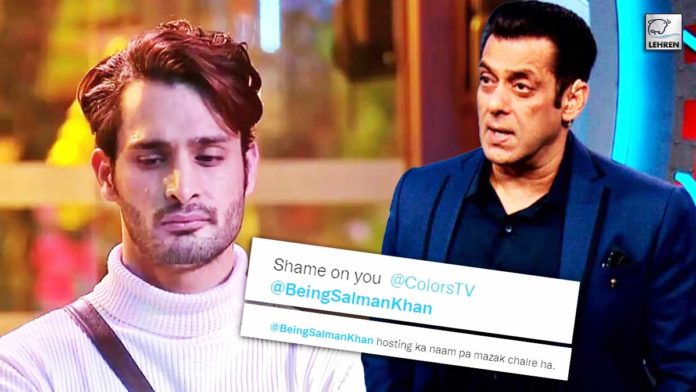 People have lashed out at Bigg Boss host Salman Khan after Umar Riaz’s eviction. Umar got into a nasty fight with Pratik Sehajpal during the torture task which was performed by Rashami Desai and Devoleena Bhattacharjee. While Pratik said that he didn’t mind, Bigg Boss gave Umar a warning.

Umar Riaz’s eviction has not gone well with viewers of the show. They are expressing their anger on Twitter by bashing makers of the show and host Salman Khan. Meanwhile, the fans have announced Umar Riaz ‘Public Winner’.

Check out how tweeps are bashing Salman Khan:

What have you made urself @BeingSalmanKhan? You are clueless how you look on that stage. I held myself from calling you out all this while, but you know what, the way my heart cries for #UmarRiaz, it hurts seeing you like a mere puppet, I so pity you.

@ColorsTV your fake & fixed winner teja without bheja will not earn love but will definitely earn more hate because she dint win because of fans but because of you !! @BeingSalmanKhan hosting ka naam pa mazak chalre ha.

My mom idolized you @BeingSalmanKhan like an ardent fan. She had albums of you since her college days. You made her cry today. She said, “kabhi nahi socha tha yeh insaan paiso ke liye kabhi ghulami karega.” You lost it today, atleast for me!

I may be stupid, I may be a fool, as u call me, but for me no one is above Allah. Be it @BeingSalmanKhan for that matter, who I idolized since childhood. U broke my heart, you lost all respect. For those crores, u sold ur Imaan. I pity you today. I do

Many celebs have also expressed their displeasure over Umar Riaz’s eviction. Himanshi Khurana wrote in a tweet, “They do what they wanna do …. votes krwao or fir nikal do …. or bash kar karke mental health bhi khraab kar do ….. well played umar.”

Well, what are your thoughts? Was Umar Riaz’s eviction fair?

Also Read: Vishal Dadlani Will Not Attend His Father’s Funeral, Here’s Why