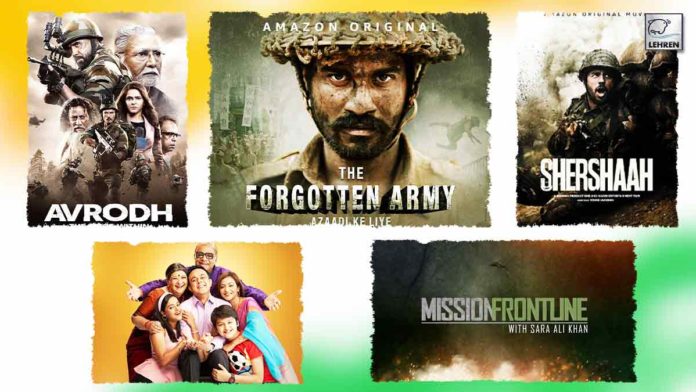 Here’s a rundown on all the titles that you can sit back, relax, and watch this Independence Day.

As we turn 75 this Independence Day, it calls for a moment to regale in celebrations and reverence. Add to that, it falls on a Sunday which further makes it an occasion to spend time with family and indulge in some leisure. Thus, we bring to you a list of shows, right from heroic sacrifices of our armed forces and tales of women empowerment to reminiscing a national hero and offering a visual treat for kids, there’s something for everyone!

Here’s a rundown on all the titles that you can sit back, relax, and watch this Independence Day.

Avrodh – The Siege Within – Applause Entertainment’s war drama Avrodh: The Siege Within focuses on the circumstances that led to the planning and execution of URI attacks where four militants attacked the Indian army brigade headquarters in Uri. 10 days later, Indian special forces launched a surgical strike on the militants’ camp, and the world was given a clear message that India will maintain a zero-tolerance approach to terrorist encroachment along her border. This web series reminded us of the sheer weight these soldiers carry on their mighty shoulders all the while reminding us of how proud we are of our army!

Where to Watch: SonyLIV

Shershaah – Inspired by a true story, Shershaah celebrates the bravery and gallant spirit of Captain Vikram Batra (PVC) and honors his invaluable sacrifice in the Kargil War. Striking 36 Mn views on YouTube, Amazon Original film, Shershaah has been the talk of the town since Sidharth Malhotra, Kiara Advani launched the film’s trailer on the Kargil Vijay Diwas in the beautiful valley of Kargil. Donning Captain Vikram Batra’s hat, Siddharth has already left us yearning for more. Glimpses of Kiara essaying the role of Captain Vikram’s support system assures us that her role will be a promising one.

Where to Watch: Amazon Prime Video

Where to Watch: discovery+

Wagle Ki Duniya – The upcoming track of Wagle Ki Duniya – Nayi Peedhi, Naye Kissey, is all set to fill us with pride as India celebrates Independence Day. The special track on Sony SAB’s Wagle Ki Duniya will showcase the residents of Sai Darshan Heights society preparing for the celebrations in honour of the national flag on this momentous occasion. Featuring the stellar cast of the show declared by the fans as ‘Best show on Television Currently’, the Wagle’s look forward to teaching Atharva the significance of this day and to explain him the reason why Independence Day is celebrated as one of the most precious day’s in India’s history.

Where to Watch: Sony SAB and SonyLIV

The Forgotten Army – Azaadi Ke Liye – Sunny Kaushal starrer, The Forgotten Army unveils the lesser-known facts of Subhash Chandra Bose’s army. Lieutenant Sodhi and his army fought for Indian Independence during World War II as part of the Indian National Army; catch the journey and sacrifice of the Indian National Army from the ones who faced it all.

Where to Watch: Amazon Prime Video

Where to Watch: discovery+