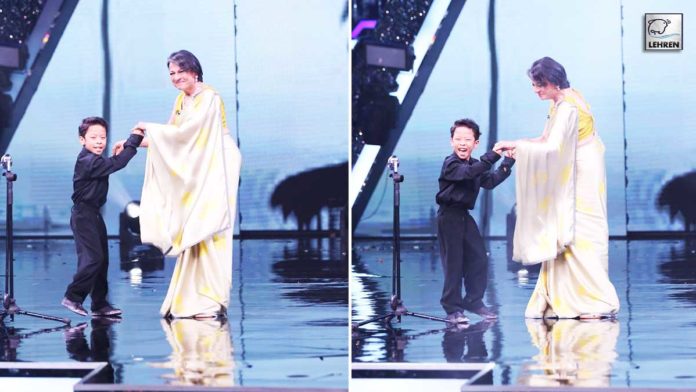 Tanuja's energy and enthusiasm for dancing astounded everyone, including the three judges.

This weekend, Super Dancer Chapter 4 will play a host to the most endearing and charismatic actor Tanuja. The contestants and their Super Gurus gave it their all and paid a heartening tribute to Tanuja.

This time around, contestant Soumit and his Super Guru had an unexpected surprise for everyone present. They performed on the song “O Mere Dil Ke Chain” and chose the dance form – Bharatnatyam to present their act, pushing themselves out of their comfort zones. The performance included a lot of spectacular moments, and all of the judges gave them a thumbs up.

Tanuja was so awestruck by the duo’s performance that she couldn’t help but whistle for their act. “Itna saara talent itne chote se bache mein kasie ho sakta hai. Because he is a dancer, his name should be Barman Dance rather than Barman Da.”

Furthermore, all three judges applauded the performance, praising super guru Vaibhav’s efforts in particular. “Vaibhav, you were doing bharat-hasyaam until now, but today you did bharatnatyam,” Shilpa Shetty added. To which Anurag Basu said “Vaibhav, people may make fun of you, but you are the suspension of the programme that can’t be seen but is the show’s backbone.”

Geeta Kapur was surprised by the performance as well. “At first, I thought you were adding a humorous touch to your act by including bharatnatyam, but it was just beautiful to witness you perform. The act included many captivating moments, which elevated the performance to new heights. I am quite proud of Vaibhav today,” she said.

The highlight of the episode was when Soumit asked Tanuja to shake a leg with him on the song “Aao Twist Karein”, which Tanuja couldn’t refuse and danced with him and the rest of the contestants. Tanuja’s energy and enthusiasm for dancing astounded everyone, including the three judges.

This weekend promises to be a blockbuster tribute to veteran star Tanuja’s legacy!