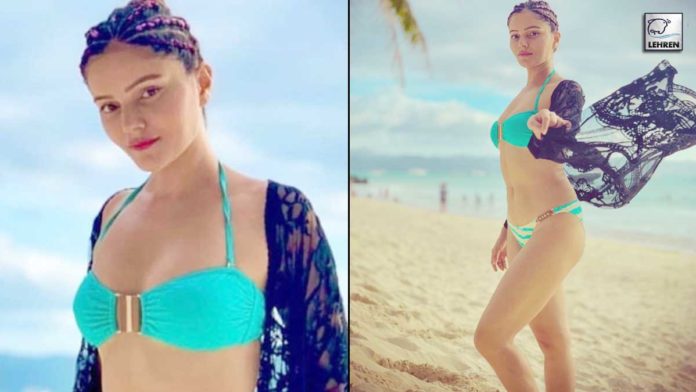 Rubina Dilaik shares a picture of herself in a blue bikini and expressed her longing for a vacation.

Famous television actress and Bigg Boss 14 winner Rubina Dilaik has raised a furor on social media with a sizzling picture of herself in a bikini. After winning Big Boss, Rubina has realized the value of self-promotion and is constantly seen posting pictures of her daily activities on Instagram. But nothing had prepared her fans for Rubina’s recent picture. Looking stunning in a blue bikini. She wrote that she is longing for a vacation and a beach.

Clicked by her husband, Abhinav Shukla, the picture went viral on social media with her fans going gaga over the pix post fashionable pictures, and her videos often have beauty tutorials. Though summer has long gone, her throwback picture brought back the summery mood. Posing by the poolside, the blue halter-neck bikini shows off her curves to perfection and her messy bun makes her look youthful and gorgeous.

Sharing the photo, Rubina Dilaik captioned it, “Longing for a vacation, a beach and (bikini emoji) n some (photoshoot) by @ashukla09 (sic).”
As soon as Rubina Dilaik posted the picture, her Bigg Boss 14 co-contestant and good friend, Nikki Tamboli, commented with several fire emojis. While a fan wrote, “Omg! Hotness overloaded (sic),” another commented, “Soooooo hot (sic),” along with fire emojis.

Rubina had delivered a shocker on Big Boss that her marriage was on the rocks and she and her husband were contemplating divorce. But staying together with the others, they later confessed that it had taught both of them how life is all about adjustments and acceptance and they, then decided to work on the marriage much to the delight of her fans and family. Rubina won Big Boss amidst tight competition. Many times she came across as an arrogant, demanding person and the celebrities in the show and audience started giving her feedback that her personality is difficult to live with…And that made her think and she decided to seriously work on her marriage.