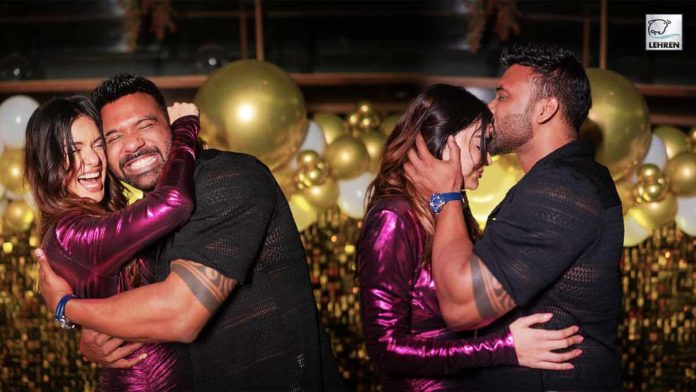 Almost 9 months after breaking up with Varun Sood, Divya Agarwal has now announced her engagement with businessman Apurva Padgaonkar.

Bigg Boss OTT winner Divya Agarwal who recently broke up with actor Varun Sood has now again found love in her life. The actress recently celebrated her 30th birthday with her friends and family. However, Divya soon took her fans by surprise as she shared her birthday pictures and revealed that she is now engaged to an engineer-turned-businessman Apurva Padgaonkar.

Divya Agarwal left everyone surprised after she announced her engagement with businessman Apurva Padgaonkar. Taking to her Instagram Divya shared a series of pictures from her 30th birthday celebrations as she announced her engagement. Sharing pictures Divya wrote, “Will I ever stop smiling? Probably not. Life just got more sparkly and I found the right person to share this journey with. His #BaiCo A forever promise. From this important day, I will never walk alone.”

In the shared pics Divya was seen flaunting her ring as she stood by her fiance Apurva Padgaonkar. Reacting to the picture many celebs congratulated the actress. Actress Mahi Vij commented, “Congratulations my jaanu”, Rakshanda Khan commented, “Whoa whoa whoaaaaaaa! And I missed THIS!!!!! Oh my God, I’m just overrrrrrrrr the moon for you girl. This has got to be the best birthday gift ever!!!!!!”

For the unversed, before getting engaged to her now fiance Apurva Padgaonkar, Divya had earlier been in quite some controversial relationships. Divya first dated Bigg Boss 11 contestant Priyank Sharma. However, the two broke up after Priyank developed feelings for his co-contestant Benafsha Soonawalla who was in a relationship with Varun Sood.

After breaking up with Priyank, Divya then met Benafsha Soonawalla’s ex-boyfriend Varun Sood in the show Ace Of Space. The two then developed feelings for each other in the show and later decided to date. Divya and Varun’s relationship was loved by their fans, the two dated each other for almost 4 years. In March 2022, Divya announced her breakup with Varun on her social media.