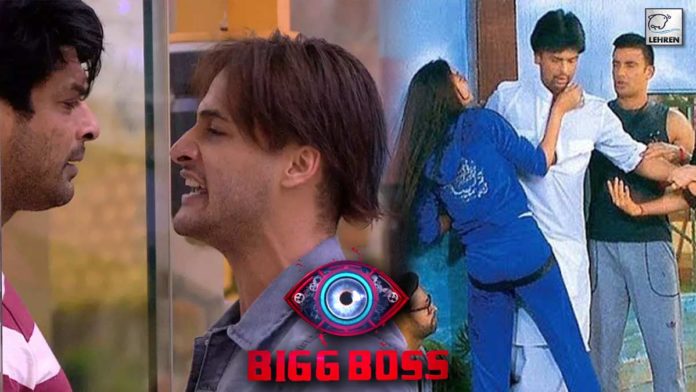 From Sidharth Shukla to Kushal Tandon, take a look at the top10 times when celebrities got physical inside the Bigg Boss house-

Its been almost 16 years since the reality show Bigg Boss started broadcasting on Indian television. In all these 16 years there have been many occasions when the contestants in the house lost their temper and were later ousted from the show for getting physical with their inmates. So without further ado, lets take a look at the top 10 times when celebrities got physical inside the Bigg Boss house-

Actor Kamaal Rashid Khan who is now known for his satirical tweets had once participated in the reality show Bigg Boss. Kamaal appeared in the 3rd season of Bigg Boss. During his appearance in the show, the actor made headlines after he brutally throwed a water bottle at his co-contestant Rohit Verma.

During a Diwali task, Siddharth Bhardwaj was seen having an argument with Pooja Mishra after the latter slept during the task. Pooja hits Siddharth Bhardwaj on the shoulder as she comes out of the room. She then blames Sid for pushing her shoulder. Following their argument, Pooja almost tries to grab Sid by his neck. Following the same, she later got ousted from the show.

In the seventh season of the reality show Bigg Boss, actor Kushal Tandon was ousted from the show after he grabbed VJ Andy by the neck. The fight started after a task was given to all where they had to ignore Andy. During the task, Andy tried to provoke others. He went a step further after he passed crude remarks on Gauhar’s lingerie. Kushal couldn’t keep his calm on the same and hit Andy.

In the 10th season of Bigg Boss, actress Bani J and Lopamudra Raut engaged in a heated argument over their families. During one of their tasks, Bani J lost control of her anger and almost strangled Lopamudra.

In the 11th season of Bigg Boss 11, actor Priyank Sharma was ousted from the show after he raised his hand on Akash Dadlani. Though Salman believed that Akash’s actions were uncalled for, he said Priyank’s behavior was unacceptable following which Salman then asked Priyank to leave the house.

In season 13 actors Vishal Aditya Singh and Madhurima Tuli had a huge fight. During their ongoing issues, both had an argument Vishal throwed water at Madhurima following which Madhurima Tuli came and hit Vishal with a frying pan. The two were later ousted from the show by host Salman Khan.

Another major fight of the 13th season of Bigg Boss remains of Sidharth Shukla and Arhaan Khan. Sidharth was seen having an argument with Rashmi Desai after Sidharth stated that he won’t take a girl like Rashmi to his house. Rashmi then throws tea on Sidharth, and to stop both Arhaan enters their fight soon after which Sidharth picks Arhaan by his shirt.

During the 15th season, Umar Riaz was ousted from the Bigg Boss house just mere weeks before the finale after he got physical with his co-contestant Pratik Sehajpal. Even though Umar Riaz was one of the most loved and deserving contestants in the audience but he had to leave the show for getting physical with Pratik.

And the latest fight among the 16 seasons is Archana Gautam and Shiv Thakare’s fight. The incident happened after Shiv provoked Archana by taking his “didi’s” name. reacting to the same Archana tried to choke Shiv by grabbing his neck and pushing him farther away. And as per the rules, Archana was ousted from the show but was taken back days after.