KRK Claims He Lost 10Kg As He Was Surviving On Water In Jail, Netizens Asks For Proof 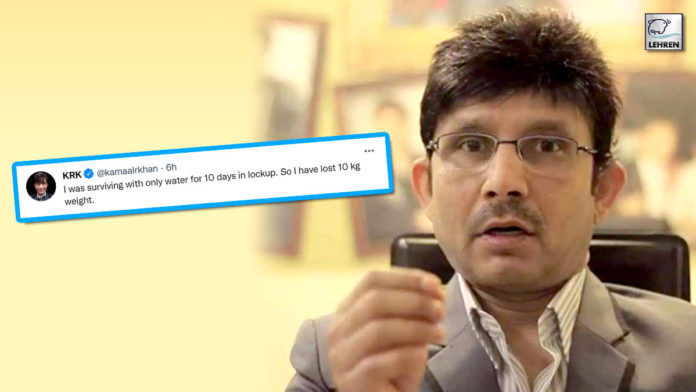 Self-proclaimed critic, Kamaal R Khan claims about having lost 10Kg weight after serving on the water in lockup. Netizens troll the actor says this-

Bollywood’s self-proclaimed film critic, KRK aka Kamal Rashid Khan was recently arrested by the Mumbai police for passing derogatory remarks against Rishi Kapoor and Irrfan Khan in a controversial tweet in 2020. However, on Tuesday he was granted bail by the court, soon after which he made his comeback on Twitter, and in a recent tweet KRK claimed that he had lost about 10Kgs during his stay in the lockup where he survived only on water, however, the netizens are now trolling the actor and asking for “proofs”.

On Wednesday, the self-proclaimed critic and actor Kamaal R Khan was granted bail by the court in the 2020 case of controversial tweets about actor Akshay Kumar and filmmaker Ram Gopal Verma. While on Tuesday he got bail in the molestation case of 2021.

Soon after getting bail in both cases, the actor made his comeback on Twitter saying that he was back for his vengeance. He wrote, “I am back for my vengeance”. However, he soon deleted his post and instead, he updated his followers with another update and wrote, “Media is creating new stories. I am back and safe at my home. I don’t need any revenge from anyone. I have forgotten whatever bad thing happened with me. I believe, it was written in my destiny.”

While in yet another recent tweet, KRK claimed that he had lost about 10kg weight while he was in lockup, he tweeted, “I was surviving with only water for 10 days in lockup. So, I have lost 10kg weight.”

Now it seems that the Tweet of the actor has garnered quite some attention from the netizens as now a segment of Twitterati have shared their reactions to his tweet claiming that it is “scientifically not possible”. A user wrote,  “How is that medically even possible? Even with enormous labour and only drinking water, it is impossible to lose 10kg in 10 days. Be it muscle mass or even fat, it is not possible.” Another user tweeted, “10 din me 10 kilo (10kg in 10 days), is it even possible?”

KRK Thanks Shatrughan Sinha For Supporting Him

One of the Bollywood actors who came out in support of Kamaal R Khan was the veteran Bollywood actor and politician, Shatrughan Sinha. Defending KRK, Shatrughan Sinha took to his Twitter on Tuesday and wrote, “One should not forget that Kamal Rashid Khan @kamaalrkhan & one should always remember that despite great opposition & struggle the ‘KRK’ is a self-made man, he has the blessings of the Almighty. He has made his place in the film industry, as well as society on his own.”

He added, “He seems to be a victim of a conspiracy of circumstances. God Bless him! Hope, wish & pray that Kamal Rashid Khan gets the justice that he deserves soon, the sooner the better. Jai Hind,” In one of his tweets KRK mentioned Shatrughan Sinha for supporting him during his low time, he tweeted, “Thank you very much, @ShatruganSinha Ji, for your support. Love you”

ALSO READ: After Getting Bail KRK Says “I Don’t Need Any Revenge From Anyone”, Take A Look