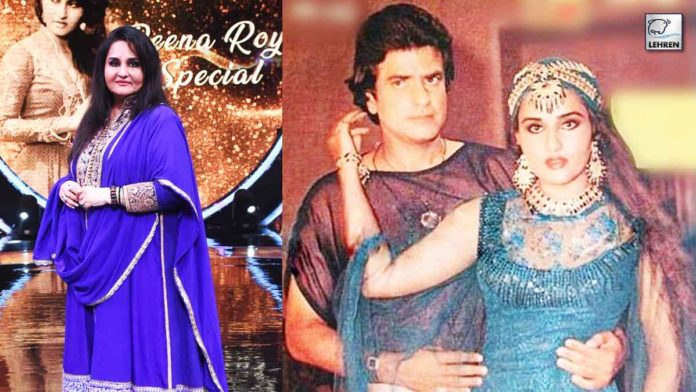 Reena Roy commends the punctuality of Jeetendraji and shares, "Believe me, when I say that I have never seen any actor, even Amitabh Bachchanji being as punctual as Jeetendraji."

The upcoming weekend episode of Sony Entertainment Television’s show ‘Indian Idol season 12’ will welcome ultimate Disco King ‘Bappi Lahiri’ and Bollywood’s evergreen actress ‘Reena Roy’ on the stage. The contestants will be giving an ode to the legends by singing chartbuster hits from their very own cinematic gems.

Post his performance, the actress was so moved that she shared a few insightful anecdotes from the then shooting days. Giving credit where credit is due, she said, “You have sung this song beautifully, Danish. Keep up with the good work. Your singing took me back to those good old days. This particular song was shot in Kashmir and all of us, including the crew members, stayed in the city for a month to complete the shoot. Back then, most of the crew brought their kids along to the sets and post the pack up, we gathered together and played games and completed our dinner by 7.30 in the evening.”

She further commends the punctuality of Jeetendraji and shares, “Jeetendraji has been my co-actor is most of the films with Late Jay Om Prakashji Films. Believe me, when I say that I have never seen any actor, even Amitabh Bachchanji being as punctual as Jeetendraji.”

She further adds, “I still remember, if we ever had an early morning shoot, Jeetuji used to call everyone at 5.00 AM and he made sure that we all got ready for the shoot as quickly as possible. So much so, that a lot of times, we ended up completing the shoot way before the schedule itself. Jeetuji has always been a pleasure to work with and I admire his extraordinary energy and zeal of motivation that he continues to inspire us with.”