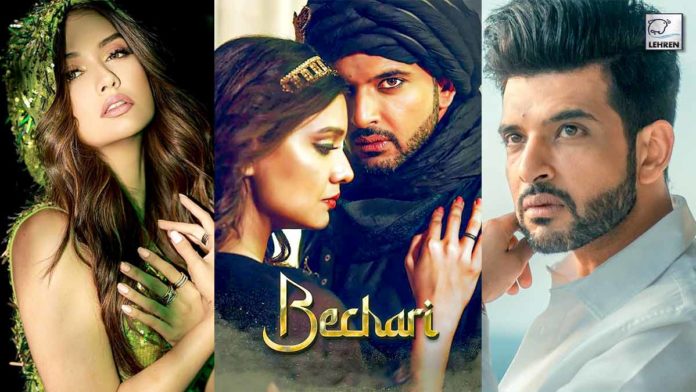 Bigg Boss contestants Karan Kundrra and Divya Agarwal have been one of the most competitive contestants in their respective seasons. And now these actors will soon be sharing the screen for their upcoming music video ‘Bechari’.

Bigg Boss 15 contestant Karan Kundrra recently shared a post on his Instagram account sharing a video and several shots with the Bigg Boss OTT winner Divya Agarwal from the sets of their upcoming music video. In the post, Karan can be seen dressed in a dark brown kurta and black turban, while Divya wore a white outfit. Sharing his look, the actor captioned his post, “Gear up for our heart-touching melody ‘Bechari’ ft. yours truly & the stunning Divya Agarwal! Releasing soon on the Times Music YouTube Channel”.

The actor shared another video earlier this week, featuring behind the scenes and making of the video. He captioned the video, “promised I’ll challenge myself.. promised I’ll not settle for ordinary.. stories to tell and be a part of.. excited?”. In his post many of his friends from the Bigg Boss house expressed their excitement by taking it to the comment section, Akasa Singh wrote, “FAV look. Can’t wait for this one”, while Divya Agarwal wrote, “Hayeeeeee !!! Can’t wait Kundra ji”.

The ex-Bigg Boss contestants have teamed up for a music video titled “Bechari,” which is being sung by Bigg Boss 15’s Afsana Khan. In the show, Karan shared a friendly bond with the singer Afsana Khan and often called her her sister.

His co-contestant and rumoured girlfriend Tejasswi Prakash also seems excited about his upcoming album. During her recent conversation with the paparazzi, the Naagin 6 actress was asked about Karan’s look in the music video. She called it ‘bahut accha’. Prior to ‘Bechari’, Karan was featured alongside his girlfriend Tejasswi Prakash in Yasser Desai’s song ‘Rula Deti Hai’. On the other hand, Divya enthralled the audience with her chemistry with Asim Riaz in ‘Dur Hua’ track.

Karan Kundrra is currently seen in the reality show Lock Upp as ‘Jailor’. Apart from this, he has also turned host for Dance Deewane Juniors. While actress Divya Agarwal and Pratik Sehajpal are also going to do a project together soon.