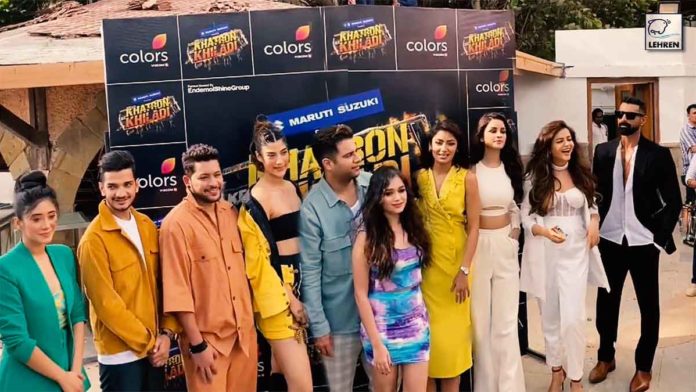 Khatron Ke Khiladi 12 contestants gears up for their journey at the show as they all appear at the launch event ahead of the shoot for the show.

The stunt-based reality television show Khatron Ke Khiladi is all set to make its comeback with season 12. Recently on the promo shoots, all the contestants from the upcoming seaeson appeared on the sets.

The shoot of the upcoming season is likely to begin in June next week and the show is reportedly going to air on colors from July. While recently in the viral pictures contestants Sriti Jha, Rubina Dilaik, Faisal Shaikh, Jannat Zubair among others were spotted at the launch event of the reality show.

Ardh actress Rubina Dilaik, who was confirmed as the contestant earlier wore all white co-ord at the event. While the youngest contestant Jannat Zubair will also be seen in Rohit Shetty’s show. For the event, she wore a blue tie-dye dress. Kumkum Bhagya’ fame Sriti Jha will also be seen on the show. The actress who has received a lot of appreciation for her role Pragya Arora in ‘Kumkum Bhagya’ is gearing up for her new journey and try some daredevil stunts on Rohit Shetty hosted reality show ‘Khatron Ke Khiladi’.

Model and actor Erika Packard will be seen making her entry in the show. She is a daughter of well-known actor Gavin Packard who worked predominately in Bollywood and Malayalam movies. Actress Aneri Vajani will also be seen in the show, recently she left the show Anupama half way during the shoot to appear in the Rohit Shetty’s reality show. Ace of Space’ fame Chetna Pande and Shivangi Joshi will also be seen in the show.

Bigg Boss 15 fame Pratik Sehajpal, Nishant Bhat and Rajiv Adatia will also be featuring in the upcoming season as the duo appeared on the event together.  Pratik, who is also excited about joining the show and doing stunts, in a statement shared: “I’ve always been a competitive person and believed in challenging myself on a daily basis. When my adrenaline gets pumping, I take the leap of faith and guess what? That is when I really fly! The key is to simply close your eyes and put faith in whatever you do”. While Lockupp winner Munawar Faruqui also appeared alongside.