Arunita Kanjilal Gets An Offer Of A Lifetime; Gets Invited To The Dharma Family By Karan Johar! 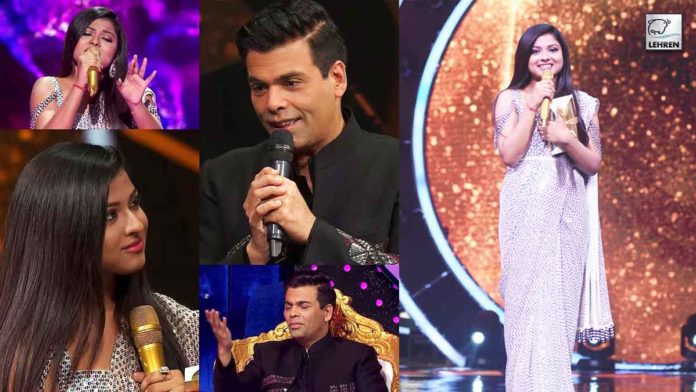 Amazed by Arunita Kanjilal's performance, Karan Johar offers her the chance of her lifetime.

This weekend, Sony Entertainment Television’s singing reality show Indian Idol Season 12 will curate a special semi-finale episode in the presence of esteemed filmmaker Karan Johar. Themed the ‘Karan Johar Special’, the top 6 finalists are all set to set the stage on fire with their performances. While all the contestants performed brilliantly and won praises from the judges as well as Karan Johar, it was contestant Arunita Kanjilal’s performance that really was a milestone moment. Arunita who sang, ‘Kabhi Khushi Kabhie Gham’, ‘Kuch Kuch Hota Hai’ and ‘Kalank’, mesmerized Karan Johar so much so that happily invites her to the Dharma family. To seal the deal further, he gives her a little confirmation note from his end, as well.

Praising Arunita’s performance, Karan Johar says, “I cannot express the emotions that I am feeling right now. You are the ultimate, ‘Suro ki Rani.”

He then goes on to say, “You have caught all the notes! When it comes to Kabhi Khushi Kabhie Gham, you have observed each of the harkat and presented those harkate in your own way. It is a difficult song, the tunes go up and down. Himesh ji, Sonu ji and Anu ji will be able to explain this to you in a better manner but, you managed to catch all those notes. There were possibilities that your voice could have cracked and you would have missed some notes but, that did not happen. And, you sang all the three songs at once, three songs! All the three songs have high notes. Today, I have become a fan of another singer and her name is Arunita. Indian Idol is a very popular show that I have been seeing with my mother every weekend. My heart is happy to see such incredible talent. At this age, to achieve so much, it is not a small thing at all. But today you (Arunita), in this blinging saree, you have given a bright and energetic performance.”

Amazed by her performance, Karan Johar offers her the chance of her lifetime. He says, “I want to tell you from the bottom of my heart that I want to welcome you to the Dharma family. I want to come and give a small confirmation note from my end. I have written it from my heart that this year, I want to make you sing a song and, I hope that the song deserves you. You know, more than you deserving the song, I hope the song deserves you.”

Indian Idol 12 will be celebrating the ‘Greatest Finale Ever’ on 15th August, one of the longest finales ever and will go on for 12 hours.