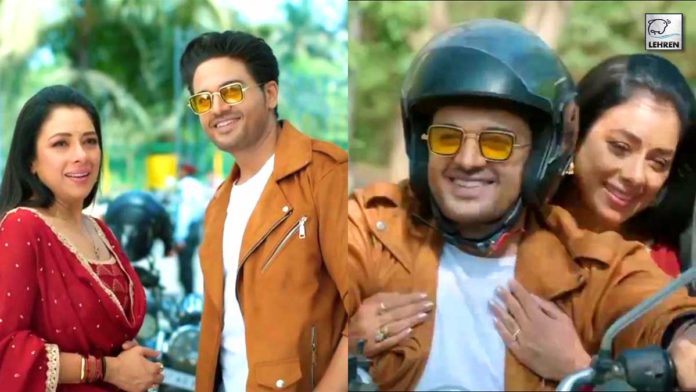 Check out Anupama's written update for the 4th May episode.

Anupama Latest News: The episode begins with Leela stopping Anupama in her ways, saying that because of their marriage she is already putting a stain on the family’s name. But going on date doesn’t suit her at this age. Anupama responds by saying that anyone can go on a date and even suggests she should go out with Bapuji. This leaves Baa speechless. Anu then assures her that she will complete all the household chores before going out with Anuj. Kanta then arrives to which Baa gets shocked and asks her what is she doing in the house. Kanta then reveals she spent the night in the house and even suggests Leela spend a day at Dolly’s house.

Anupama Asks Kinjal For Help For Her Date With Anuj

Anupama asks Kinjal to get her ready for a date. Kinjal suggests Anupama wear a suit. Paritosh and Kinjal get Anupama ready. Kavya asks Vanraj to learn something from Anuj as the latter knows to make Anupama feel special. She praises Anupama for balancing relationships and also knowing how to make them more beautiful. Vanraj and Leela get irked with Kavya. Anuj comes and gets smitten seeing Anupama. He praises Anupama. Kavya says Anuj, Anupama’s love story is no less than a fairy tale and she hates to say that. She accepts the fact.
ALSO READ – Anupama: Namaste America Telly Updates 2 May- Vanraj Plans To Stop Anupama From Going To USA

Anuj Takes Anupama On A Date

Anuj arrives at Shah’s residence on a bike and waits for Anupama while Vanraj stands at the door. Anuj spots Anupama in a red suit and approaches her. Anuj asks where is her Anupama. And compliments her on her looks. The family praises the couple. Vanraj stops Anuj and Anupama on their way, Vanraj says to Anuj that he needs to talk about something important. Anupama says to Vanraj to talk later. Samar, Kinjal and Pakhi tease Anupama, Anuj. Paritosh decides to take Kinjal to the doctor. Samar decides to take Pakhi to have ice cream. Kavya joins Samar and Pakhi. Samar says to Kavya she can even help them with wedding work. Kavya agrees. Leela says to Vanraj that only they are left unhappy and others are enjoying.
ALSO READ: Anupama Written Update 30 Apr: MaAn’s Engagement Ceremony

As Anu and Anuj go on a bike ride, the latter asks her to grab him tightly and leaves her blushing. There, Anuj and Anupama enjoy their first bike ride. Vanraj recalls his past with Anupama. Leela comes and asks Vanraj to figure out what Hasmuk is hiding. She doubts Hasmuk is surely hiding something from them. In the meantime, Anuj surprises Anupama by taking her to their college. Anupama gets happy. Anuj tells Anupama that he always wanted to come to the college but not without her. Both decide to recall their past.

Anupama gets excited about her mehndi and sangeet. Devika along with Shah decide upon a sangeet theme. Anuj and Anupama spend quality time together.