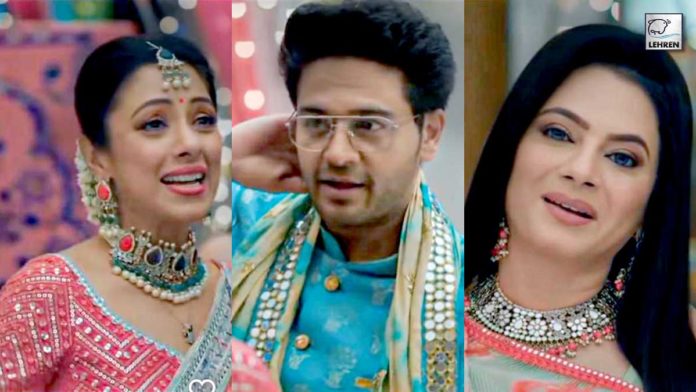 Check out Anupama's written update for the 30th April episode.

Anupama Latest News: The episode begins with Rakhi saying that seeing the engagement it feels, Kavya says like one should get a similar someone. While Vanraj and Leela stand jealous seeing everyone praising the MaAn couple. Devika says Anu Is Looking So Happy, She Feels Happy Seeing That. Pakhi Says They Look Like A Celebrity Couple Walking On The Red Carpet. Samar Says Their MaAn Is Not Less Than A Celebrity. GK Says His Anuj Is Not Less Than A Real-Life Celebrity. Jignesh Jokes Leela Is A Real-Life Villain.

Kinjal And Kanta Start The Engagement Ritual And Perform Anupama And Anuj’s Aarti Followed By Jignesh, GK, Malvika, Devika, and Others. Anupama Walks To Leela And Seeks Her Blessing, But Leela Refuses To Bless Anupama. She Sadly Returns Back To Anuj. Pakhi Clicks Selfies With Anupama And Anuj Followed By Others.

Rakhi asks Leela if she will not do aarti of MaAn. Leela says she will take off her sleepers. Rakhi decides to take off the evil eyes. She adds on the occasion she wants to recite a poem. Rakhi berates Anupama and Anuj through his poem. Anuj sits smiling hearing Rakhi. Rakhi throws money on Anuj, Anupama. Shah stands stunned. Anupama collects the money. Sanjay, Kinjal, Devika, Malvika, Samar, Dolly and others help Anupama to collect the money.
To Rakhi’s actions, Anupama gives her a befitting reply, by correcting Rakhi for disrespecting the money in the name of taking an evil eye off.  She asks Samar to use the money in feeding the poor people. Leela taunts Rakhi for getting insulted by Anupama. Vanraj says Rakhi has an experience in getting insulted by Anupama. Anupama decides to cheer up Anuj’s happiness as he dance on ‘ankhiyon se goli maare’ song. Shahs join Anupama and Anuj and dance with them. Rakhi says to Leela that Anupama is dancing happily to make her jealous. Kavya joins Anupama’s team. Rakhi says to Vanraj that they lost one member of their team.
ALSO READ: Anupama Written Update 26 Apr: Vanraj Tries To Instigate Anupama

After the dance performance, Anupama confronts Rakhi saying, She feels proud choosing Anuj. She recalls her moment with Anuj starting from friendship to falling in love. Anupama expresses her love for Anuj and says ‘I Love You’. Leela asks Anuj, and Anupama to exchange rings and get the function done. Malvika takes Anuj, and Anupama to the backyard. Shahs join them. Malvika pursues the couple to play the puzzle game, Anupama Tells Anuj That When They Are Together, They Can Do Anything. They Both Start Finding Names. Vanraj Looks At The Engagement Rings And Grins. Anuj Searches Anupama’s Name In The Puzzle. Vanraj Points It, Stunning Everyone.

Anuj’s and Anupama’s rings go missing, the family doubts Vanraj about hiding the rings. Defending himself Vanraj says that he could be the Hero or Villain, but is definitely not so predictable.