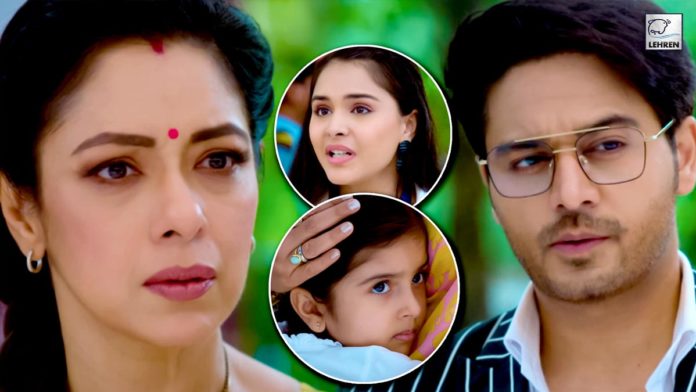 Anupama Written Update 20 July 2022: The latest episode of Anupama begins with Anupama talking with Anuj about her dance classes, Anuj also decides to finish his meeting to be with Anu. Anu comes at takes pictures of Anupama and Anuj with the camera. Meanwhile, Barkha prepares a full feast breakfast for Anu.

Barkha And Ankush Gets Stunned

Pakhi prepares for her meeting with Adhik, she gets furious as Vanraj tells her that he will drop her at the college. On the other hand, little Anu sees the feast on the table. Anupama tells Anu that she can have whatever she wants. Anupama goes to serve the family breakfast, meanwhile, she sees Pakhi calling Adhik and gets suspicious. Later Ankush asks Anuj about handling their business in Mumbai. However, Anuj refuses to hand over the business to Ankush saying that Ankush already has enough work for himself.

Anuj and Anupama decide to take Anu to the school. Barkha asks about her school and advice Anupama to get Anu in a better school. Anupama tells Barkha that they have decided to get Anu’s admission done to Pakhi’s school. Later Ankush shares with Barkha and says he doubts that Anuj already knows the reason for their visit to India.

Pakhi Vents Out Her Anger On Anu

Vanraj drops Pakhi to the college at the same time Anupama-Anuj reaches the school with Anu. Later Anupama and Pakhi argue with each other as she learns that Anu is going to take an admission to her school which is close to her college. Pakhi tells Anupama to choose between her and Anu. Vanraj thinks Anupama didn’t do right by fostering a child. He gets irked thinking Kavya too got inspired and wants to foster a child.

Kinjal waits for Anupama as she has to visit her doctor regarding her pregnancy. Meanwhile, Anupama stands shocked as Anu meets with an accident. After learning that Kinjal went alone to her doctor Vanraj blames Anupama for ignoring her responsibilities due to Anu.