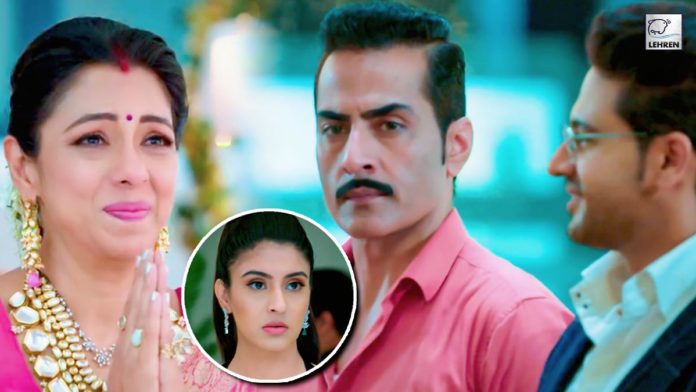 Check out Anupama's written update for the 13th June 2022 episode.

Anupama Written Update 13 June 2022: The latest episode begins with Anupama apologizing to Vanraj. She requests him to forgive her and attend the function. Shah gets amazed seeing Anupama’s big house. Anuj welcomes Shah. Leela asks Anuj to look after his guards too and indirectly taunts over the insult they faced. Anuj and Anupama stand mum. Hasmuk handovers the gift to Barkha on Shah’s behalf. Barkha instructs the house helper to keep the gifts aside. Vanraj sees Barkha. Barkha avoids Vanraj. Barkha sees Lord Ganesh’s sticker on the house door. She confronts Anupama. Anupama tells Barkha that she sticks it.

Anuj introduces Shah to Ankush. Vanraj finds Barkha expected gift from another guest. Barkha takes the anxiety pills. Ankush confronts Barkha. Barkha says to Ankush that she can’t let Anupama’s family snatch Adhik and Sara’s happiness. She decides to secure Sara and Adhik’s future. Ankush stands mum. Anuj asks Anupama what happened with Shah. Anupama tells Anuj that Shah’s name wasn’t there on the guest list. Anuj says Barkha didn’t inform him. He feels guilty. Anupama cheers Anuj. There, Sara and Samar meet each other. They both learn about their relationship with Anupama and Barkha. Kinjal and Paritosh join Sara and Samar.

Barkha Gets Irked By Anupama

Barkha introduces Anuj and says he is back in the business. Anuj praises Barkha for decorating the house. He further praises Anupama and introduces her as his wife. Barkha gets annoyed. Anuj asks Anupama to say something on the occasion. Barkha cuts Anuj and Anupama. She plays the music and starts the housewarming party. Anupama stands confused. She stops the music and tells Barkha that the party will start post puja will be done. Leela says now she understands why Rakhi used to feel entertained seeing their fight. She says it is entertaining to watch Anupama vs Barkha. Kavya corrects Leela. Anupama explains to Barkha that a house is precious as it gives shelter whole life. Barkha says her guests are not here to sit in puja. Anupama says they all will sit in the puja