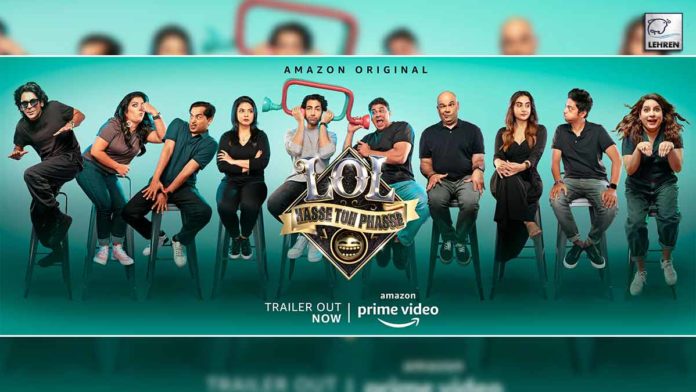 Amazon Prime Video, today, unveiled the official trailer of the all-new Amazon Original Series LOL- Hasse Toh Phasse. This local edition of the International Amazon Original Series LOL will unite an eclectic group of comedians who have left their own indelible mark on India’s comedy landscape. Aadar Malik, Aakash Gupta, Aditi Mittal, Ankita Shrivastav, Cyrus Broacha, Gaurav Gera, Kusha Kapila, Mallika Dua, Sunil Grover and Suresh Menon, under the vigilant watch of hosts Arshad Warsi and Boman Irani will face their toughest challenge yet! Perhaps for the first time, it’s not just their sense of humour but also their endurance which will be tested as they battle it out for six consecutive hours, to make the others in the house laugh, while maintaining a poker face themselves!

The goal is to be the last one laughing in the room, and the person who keeps a straight face the longest will eventually win the game. Prime Members in Indian and across 240 countries and territories can binge-watch the show starting 30th April, 2021 exclusively on Amazon Prime Video.

Aadar Malik – Rose to fame with his comedy special, Stand-up The Musical, a unique comedy show on Amazon Prime Video which included a guitar and a piano

My first comedy special was made possible because of Amazon Prime Video. To get a grand piano to shoot a comedy show would never have been a possibility otherwise. And since then, there has been so much more that I have worked on with them and continue to do so from Improv comedy to more Standup. With L0L- Hasse Toh Phasse, the excitement was to be part of a cast of 10 hilarious comedians and 2 hosts that I have really looked up to as actors. Just trying to find your place in this team of people is incredibly tough. Being stuck with people who are funny 24×7 and not being able to laugh was what I imagine hell would be like. This is such an eclectic group of performers and will definitely appeal to a very wide audience. After this show, my no laughter armor has become too strong.

Amazon Prime Video and I go back a long way, so the chance to work with them again was obviously exciting. Winning Comicstaan Season 2 was a very overwhelming experience, and to see the show reach such a large and global audience was surreal. I didn’t have to think twice when I was approached for LOL-Hasse Toh Phasse, because this is exactly the kind of distinct show format I’ve been itching to work for. 10 comedians and 2 hilarious hosts together under one roof for 6 hours – it’s going to get crazy and real in equal measure. My lung capacity has improved manifold.

Humour is one of the purest things about human beings. Like a sneeze, it can be involuntary. In bad times it is a survival mechanism. In good times it is an expression of joy. In these times, it’s no surprise that we are all turning to it. LOL-Hasse Toh Phasse was absolutely ridiculous. Not being able to laugh while also trying to make someone else laugh was like not being able to smell a dish while you cooked it. While we (the contestants) couldn’t smile or even laugh, I have a feeling that viewers will laugh for sure- sometimes as an expression of joy, and sometimes as an expression of pain.

LOL- Hasse Toh Phasse is extremely special for many reasons. I felt honoured to be a part of it along with eminent entertainers and comedians such as Sunil Grover, Suresh Menon, Cyrus Broacha and others. Aditi, Kusha and Mallika are among the best comedians in the country. I will cherish working with them on the show. To be honest. I had a HUGE fangirl moment when I found out that Boman Irani and Arshad Warsi would be hosting and judging the show. The overall experience was thrilling and I can’t wait for the show to premiere on Amazon Prime Video later this month.

Firstly, I would like to publicly apologize to my family and to audiences in advance, for our antics on LOL-Hasse Toh Phasse. There is some real madness in store for them. Having put that on record, I would like to add that I have never restricted myself to a particular medium throughout my career and believed in exploring each and everything that destiny has planned for me. Be it acting in theatre or films, hosting a show or a podcast, pranking pedestrians, covering news, performing stand-ups, writing columns, and publishing a book. LOL-Hasse Toh Phasse is a unique themed show which is another exciting milestone in my life, and I am super thrilled to be a part of it.

As an actor and comedian, I love variety and offering something new to my audiences every time. Over the years, I have always tried to be experimental with my roles and have played all characters with utmost conviction. When I first heard about this unconventional show, I knew that I had to do it. I have tried all kinds of stunts and looks, to make my fellow-contestants crack up. I am thrilled that such an interesting format which has been successful across the world is finally here in India in a local avatar.

I have always thrived to entertain people and I am delighted to have got this opportunity to be a part of LOL-Hasse Toh Phasse that brings unscripted comedy in a brand new format. Most of the characters that I play are inspired by real life or drawn from my daily routine and I got a chance to really push the envelope on this show. I crack up at my own jokes half the time so keeping a straight face around all these senior and experienced comedians wasn’t easy for me.

Mallika Dua – Best known for her funny characters on Instagram

I had a blast on LOL-Hasse Toh Phasse and I am sure viewers will too! I won’t lie, I was very very scared initially. I thought I’d be intimidated and I’ll freeze but the amount of fun I had was crazy. Something about letting your guard down and being vulnerable and childlike! This show was very challenging too, you basically have to make other comedians laugh, without laughing yourself! You have to be on high-alert at all times, not to let out even a slight smile. It’s a high-pressure high fun comedy battleground and it’s unlike anything I’ve done before. It’s not like a scripted shoot, it’s not stand up either and it’s not theatre either! It’s crazy. I am thrilled that this format is finally here in India.

As soon as I entered the house and discovered who else was in the battleground with me, I thought- “Phass Gaye”! LOL- Hasse Toh Phasse was a one-of-a-kind challenge and experience. It is not just a show… It is a unique human experiment. Imagine being with 10 hilarious professional comedians, all with their A-game on, under one roof. And you can’t even smile! All I can say was- It was not easy, but I had an absolute blast, and so will viewers, when they watch LOL-Hasse Toh Phasse.

Suresh Menon – Popularly known for his comic roles in the Bollywood movies like Grand Masti, Phir Hera Pheri, Partner, among many others.

I have a face that has inspired the smiley emoticon and it was really challenging for me to keep a straight-face and not laugh when some of the most talented entertainers in the country were cracking jokes and doing hilarious acts around me. I thoroughly prepared with family and friends and also the fact that I have been married for a long time helped. I also trained every day with the help of a facial aerobic trainer and an eye healer, I came up with a game-plan to control myself from smiling or laughing, before I entered the LOL House. Whether all my homework helped or not is for viewers to watch and discover. This show is the most formidable challenge of my life and I have thoroughly enjoyed being a part of it. Also looking a bit like Tom Cruise from certain angles helped, especially the back of my neck.

Dusshyant Wag: Definition Of An Actor Has Now Broadened And Emerged!

Chandni Soni: Women Should Be Unapologetic About How They Look!