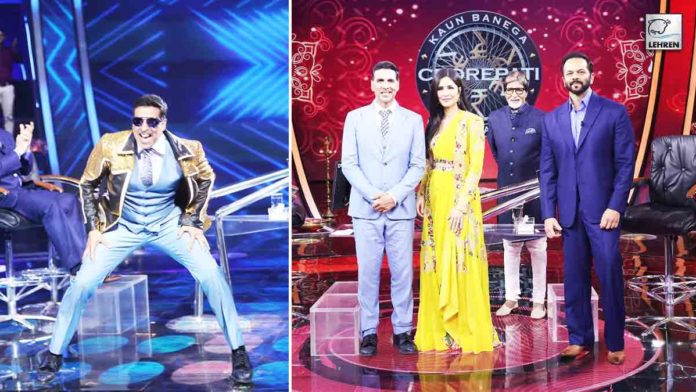 Akshay Kumar opens up about his acting career and first film on the special Friday episode of KBC 13.

Coming Friday, Sony Entertainment Television will see the mega trio – Akshay Kumar, Katrina Kaif and Rohit Shetty gracing the Shaandaar Shukravaar episode of Kaun Banega Crorepati 13. Celebrating Diwali week, the trio will be seen playing the game along with the host Amitabh Bachchan. During the game, they will also be seen sharing personal anecdotes, their experience in the entertainment industry and more. In one conversation, Amitabh Bachchan will be seen posing a question to Akshay Kumar about how he ventured into the Bollywood industry. Superstars Akshay Kumar will be seen spilling the beans about his journey.

Unveiling unknown facts, Akshay Kumar shared, “It’s a coincidence that I got a chance to act. I used to go to kids houses and teach them karate, martial arts in Bombay and I used to earn 5-6 thousand rupees per month. One day, someone told me that you are tall and smart, why don’t you try modelling? I didn’t know what modelling was then. But, someone gave me a card and invited me for modelling and I went over to town and did an ad for a furnishing showroom, their shop was on linking road. So I went there for the ad shoot and I saw that this was an amazing thing that I came for and in the meantime, a beautiful model came over there and we had to pose. And just like that, they kept on taking photos for about 2 hours and gave me 21 thousand rupees for modelling. I thought am I crazy to work for a month and earn 5 thousand, I rather do this instead. Within 2.5-3 hours, I earned 21 thousand which was amazing. After that, I started modelling, working hard, did ramp walks and slowly, someone showed my photos to Pramod Chakravorty and I got my first film – ‘Deedar’ from him.”

The trio will be seen donating the proceeds from the winning amount to ‘Bharat Ke Veer’, a government website that helps the families of the soldiers who’ve passed while serving our country.

So, tune in to “Kaun Banega Crorepati’s Shaandaar Shukravaar on Friday, 5th November at 9:00 pm only on Sony Entertainment Television.