A Story Of Revenge & Power – Meet The Angre Family Of Cartel! 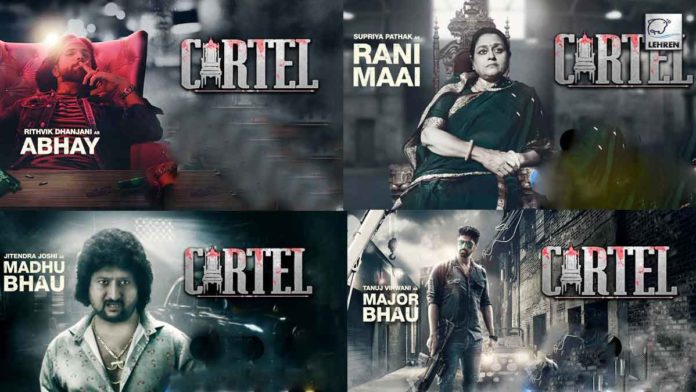 They say the criminal empire never sleeps and just as well, we have a new crime family in town you don’t want to mess with! Mirroring the audience’s fascination with gangsters and their turf wars, MX Player and ALT Balaji recently dropped the trailer of their crime drama Cartel and introduced us to the powerful #Angres.

Cartel is the story of the first family of the business, who define power and rule Mumbai, and is led by Rani Maai. The fate of this family’s rule lies upon the shoulders of her three sons – Major Bhau (Tanuj Virwani), Abhay (Rithvik Dhanjani), and Madhu (Jitendra Joshi). But who are the Angres?

Strong-headed, shrewd, and just – Rani Maai, played by the versatile Supriya Pathak, is the head of the Angre family, the most influential gang in Mumbai. After the death of her husband, she took over the Angre family’s businesses and rules with an iron fist. No one in Mumbai dares to defy her. Rani Maai’s principles stem from righteousness and love for all her children, even those that she adopted.

Here’s a sneak peek into her world:

Always one to be rowdy, Madhukar A.K.A Madhu is the Eldest in the Angre family. Rani Maai adopted him, his younger brother Sharad and his little sister Shweta after their mother’s unfortunate demise while he was just a 14-year-old. Played by Jitendra Joshi, Madhu is the protector in the family and always led a life inclined towards the world of crime.

A Major in the army turned gangster, Major Bhau a.k.a Sharad is one of Rani Maai’s adopted children. Played by Tanuj Virwani, this character is laced with layers of trauma, loyalty, and contradictions. His only weakness is his family. As pragmatic as he is, he would take a bullet for his family or be the one behind it.

Being the only son of Rani Maai and Shashank Angre, Abhay Angre, played by Rithvik Dhanjani, has always believed that he is next in succession as the leader of this gang. Power-hungry, hot-headed, and impulsive, Abhay, at every point tries to prove his sense of responsibility to Rani Maai. But after his mother is shot, he transforms into a man blinded by his ambitions and hatred.

Speaking about this, Rithvik Dhanjani adds, “While the mob doesn’t really exist in India today the way it did in the ’60s, ’70s, and ’80s, there’s something about the golden era of the mob rule that holds a lot of interest for many of us. This show marks my digital debut, and I am so glad it is with a crime drama like Cartel. Abhay and I have nothing in common so everything you see on screen has been learned from scratch for my on-screen portrayal. I really hope my fans like my new role as Abhay.“

this unseen and powerful avatar of Rithvik here

The series is available to stream starting 20th August on ALTBalaji and MX Player’s.