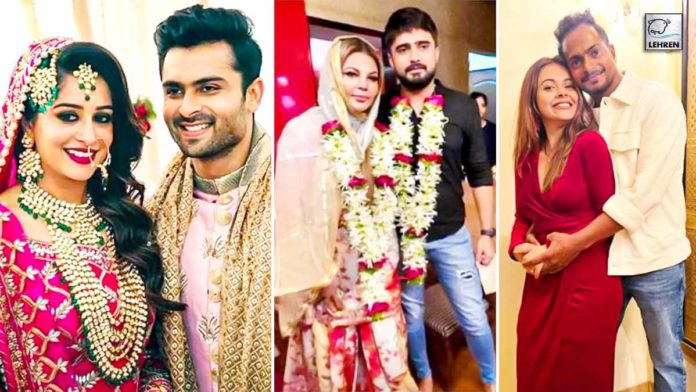 From Devoleena Bhattacharjee to Dipika Kakar, check out the list of TV actresses who married Muslim men.

It is difficult to have inter-religion marriages in India. Especially when it comes to a love affair between a Hindu and a Muslim, it gets special attention from people. If a Hindu woman marries a Muslim man, it is immediately labelled as “Love Jihad”. A recent example being Tunisha Sharma and Sheezan Khan’s love story where Sheezan was accused of forcefully trying to convert Tunisha’s religion. The accusations began after she died by suicide due to unknown reasons.

However, people in love often go against the world to be with their lover irrespective of their religion. Here’s a list of Television actresses who married Muslim men and broke the stereotypes:

Entertainment queen Rakhi Sawant married her boyfriend Adil Durrani in July 2022. They had a secret wedding ceremony according to Islamic traditions.

Devoleena Bhattacharjee married her gym trainer Shanwaz Shaikh in Dec 2022. The news came as a surprise as they kept their relationship private until they got married. The duo had a court marriage.

Check Out: Devoleena Bhattacharjee Slams Rumors About Her Pregnancy

Dipika Kakar and Shoaib Ibrahim fell in love while shooting for Sasural Simar Ka. They tied the knot in February 2018. Dipika even converted her religion into Islam to marry Shoaib.

TV actress Chhavi Mittal married director Mohit Hussein in 2004. The couple has two adorable kids together-  daughter Areeza Hussain born in 2012 & son Arham Hussein born in 2019. They are the perfect example that love wins over religion, caste and other societal barriers.

Model and TV actress Tina married her college lover Hussain Kuwajerwala. They dated for nine long years from 1996 to 2005 and tied the knot on December 21, 2005. Tina is a Punjabi girl while Hussain is a follower of Islam.

Bade Achhe Lagte Hain actress Chahatt Khanna has been married twice. Her second marriage was inter-religion. She married Farhan Mirza, the son of Shahrukh Mirza in 2013 and the couple has two daughters together. In 2018, Chahatt filed for divorce citing sexual and mental harassment.