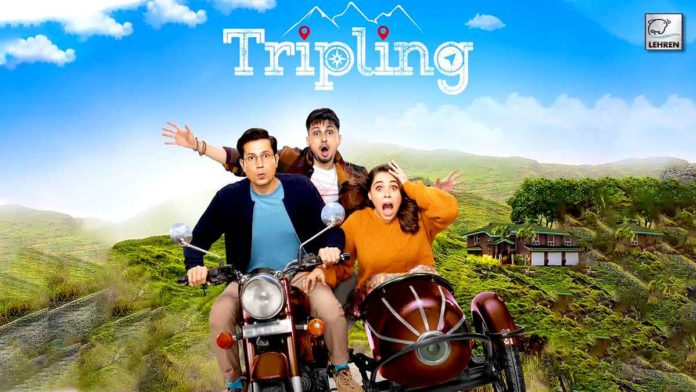 Baba, we are happy to tell you Chandan, Chanchal, and Chitvan are back on road after three years.

The highly acclaimed siblings series Tripling is back on the road. After a long wait of three years, the third season of Tripling will be out soon. The cast of the TVF series announced the happy news through their social media account. Tripling 3 is anticipated to be a much more fun ride for three siblings as derived from the new poster that was unveiled.

Chandan, Chanchal, and Chitvan are set to go on another adventurous trip in the approaching season. The lead cast Sumeet Vyas, Maanvi Gagroo, and Amol Parashar shared the first look of Tripling 3 on their social media accounts. The trio is bringing in a dose of an entertaining trip for us with their set of problems during their journey on Zee5.

In the poster, Chandan is seen riding a bike with his brother Chitvan behind him and sister Chanchal in the sidecar. They looked terrified as they stumbled on a rock and may get into an accident. Sharing the poster on Instagram, Sumeet wrote, “Did we make you wait for long?” Sumeet Vyas aka Baba for Chitvan and Triplings fans, penned the screenplay and dialogues for the series.

In an exclusive interview with Lehren, Kumud Mishra, who plays the father’s role, spoke about the upcoming season will be different. He said, “the characters are very different. When we started, the characters were different and now after a time-lapse, a lot has changed in their lives. And, you’ll see those changes in the show. There’s a logical progression. it is not a forced season.”

Tripling season 1 was released on TVF’s streaming platform as well as on their Youtube channel. The bond of the three siblings received much love and adulation. The first season was released in 2016 and the second premier on SonyLiv in 2019. The previous two seasons were directed by Sameer Saxena, however, the third will be helmed by Neeraj Udhwani. The third season too will revolve around sibling camaraderie and banter. Tripling 3 will release soon on Zee 5.