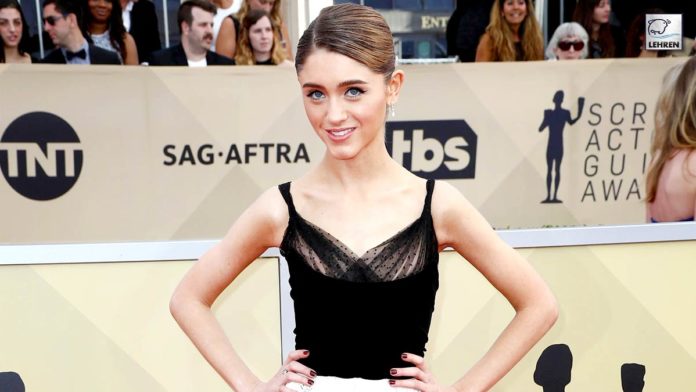 Stranger Things actress Natalia Dyer admitted that the recognition from being on the Netflix hit series has been intense.

Natalia Dyer become a global sensation with her character Nancy on Netflix hit series. And recently, the actress shared her feelings on her Stranger Things character and the fame she’s experienced during her recent appearance at The Tonight Show Starring Jimmy Fallon on NBC.

The actress admitted that the recognition from being on the show has been intense. ‘It’s a lot,’ Natalia said. ‘It kind of never gets normal.’ Jimmy had asked Natalia, who lives in New York if she could still walk down the streets after the success of Stranger Things where people don’t scream ‘Nancy’ at her.’ Megan Thee Stallion, who also sat behind the desk with Jimmy and helped interview Natalia, told her she was her number one fan.

Jimmy asked Megan if she was ‘team Jancy or team Stancy.’ ‘I’m team Stancy,’ Megan said. ‘I want Steve.’ Megan said at first Nancy liked Steve. ‘Yeah, me and Steve, what a guy,’ Natalia said. Megan said that then Nancy just dumped Steve, despite how he kept saving her life on the show and went with Jonathan. ‘I do feel bad,’ Natalia said. ‘Honestly, the way that Jonathan and Nancy happened she doesn’t always make the most morally right decisions all the time.’

Jimmy asked if she knew anything about next season but she said that she didn’t. Megan asked her about how in the last season she was flirting with Steve. ‘I have options,’ Natalia said. ‘No, I’m just kidding.’ ‘Nancy has options,’ Megan said. Jimmy asked about her ‘ro-nance’ with Robin, who’s played by Maya Hawke on the hit Netflix series.

‘That’s the word on the street,’ Natalia said. ‘That’s the name that they have been given.’ Jimmy asked if her character Nancy missed Barb, who was famously killed off in season one. ‘Can you let her back in?’ Megan said. ‘That’s above my pay grade,’ Natalia said. ‘People need to stop leaving. I think that’s the thing they should just stick together. It’s when people go off by themselves.’ ‘This is a lesson to friends everywhere,’ Megan said.