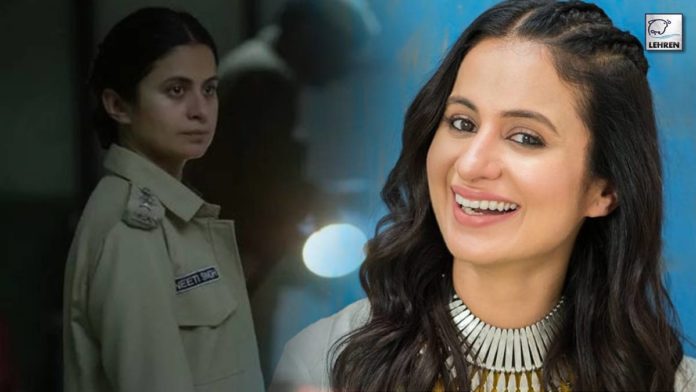 Rasika Dugal has earned fame and recognition from the critically acclaimed web series Delhi Crime. She revisits her role as Netflix returns with the second season of the award-winning crime thriller. Rasika earned applause for her amazing performance as IPS officer Neeti Singh in ‘Delhi Crime’.

The show was named Outstanding Drama Series at the 2020 International Emmy Awards. Her look from the second season was dropped and fans are eagerly waiting to see what’s in the store when the series will be released. Streaming platform Netflix shared a glimpse of the next chapter and it looks like an edge-of-the-seat thriller.

Speaking of the show and how her character is evolving in the upcoming season the Mirzapur actor also revealed Delhi Crime is close to her heart. Talking about the new season, Rasika said, “Delhi Crime is a show which is close to my heart. I loved reprising my role as IPS officer Neeti Singh. She is idealistic and sincere with just that touch of being jaded, which, I guess, is inevitable for anyone who is part of a difficult system. This season has a lot of her trying to navigate the personal and the professional.”

She further added: “I am so looking forward for the season to release after we shot it in spurts over the last two years. We started shooting pre-pandemic and finally finished shoot late last year. So I am delighted that it is ready to be shared with an audience who gave Season One so much love.”

Rasika was seen as an IPS trainee in the first season, however, she has been promoted to officer post in the second season. Well, the plot and release of Delhi Crime 2 are yet to unfold, the makers managed to bring the ensemble cast together. The favourite series of the audience features Shefali Shah, Adil Hussain, Rajesh Tailang, Tillotama Shome, Yashaswini Dayama, Rasika Dugal, and others.

With power-packed Delhi Crime, Rasika also has ‘Humorously Yours’, ‘Mirzapur’, ‘Made in Heaven’, and other digital shows to her credit. Apart from Delhi Crime 2  ‘A Suitable Boy’ actress is also has Spike’, ‘Adhura’ and ‘Lord Curzon Ki Haveli’ in her kitty.