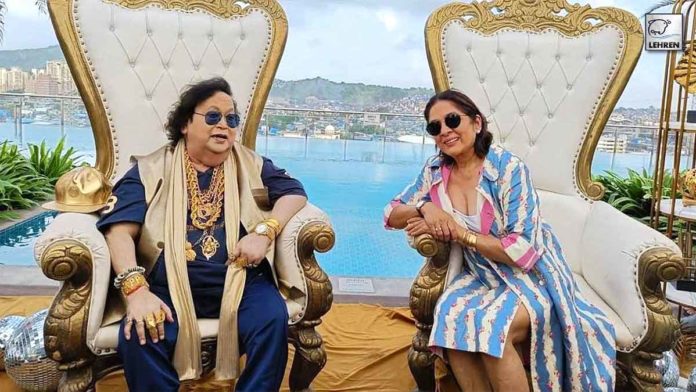 The second season of Netflix’s most popular Indian web series will be out soon. Masaba Masaba season 2 has created a lot of buzz before its release. Season 2 promises to take fashion and glamour a notch higher with drama and chaos. Neena Gupta is reuniting with her daughter and shared her experience of working with legendary singer Bappi Lahiri and shooting the following chapter of the show.

The show has a cameo of various actors that have played an important role in Masaba Gupta’s life. Season 2 will also see an adorable cameo of late singer Bappi Lahiri alongside Neena Gupta. A picture of the two from the shoot also went viral. The veteran singer left the industry in utter shock after his unfortunate demise in 2022.

Recollecting the time while shooting with Bappi Ji, the Badhai Ho star said: “I vividly remember the day when we shot for it. He wasn’t particularly in good health but I could still see a child-like enthusiasm in Bappi ji when he came on the sets. He was wearing a golden cap and his usual trademark jewelry. He told me that he was really excited. We just have one scene and it isn’t a long sequence but he was simply in his element. He improvised his lines and we had a great time shooting with him.”

Neena added, “I was taken aback with the news of his demise as it happened a couple of months after we shot for the show. I’ve been a fan of his work. He gave numerous chartbusters which are going to remain evergreen.”

Masaba Masaba series is based on the fashion designer’s personal and professional life, including her highs and lows. It stars real-life mother-daughter duo Neena Gupta and Masaba Gupta playing themselves. In season 2 Masaba Gupta wants to be a fashion king but life has different plans.

Apart from Masaba Gupta on whom the series is based and her mother Neena Gupta, the show also features Neil Bhoopalam, Rytasha Rathore, Ram Kapoor, Kusha Kapila, Barkha Singh, Armaan Khera, and Kareema Barry. Masaba Masaba is directed by Sonam Nair and produced by Ashvini Yardi. The series is scheduled to stream on Netflix on 29th July 2022.