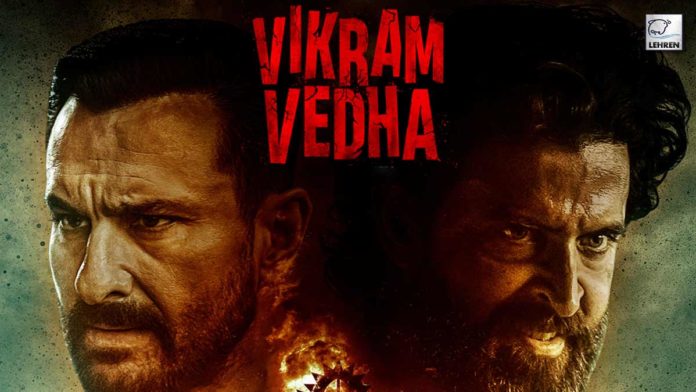 Vikram Vedha is neo-noir action thriller film featuring Saif Ali Khan, Hrithik Roshan and Radhika Apte. It is written and directed by Pushkar–Gayathri. The film is jointly produced by T-Series and Reliance Entertainment.

Like the Tamil original which pitched R Madhavan as upright cop Vikram and Vijay Sethupathi as the very dreaded Vedha, writer-director duo Pushkar & Gayatri strike the right balance in Hindi.

Saif Ali Khan in the uni-dimensional role of ramrod straight Vikram stands his ground while Hrithik Roshan, handsome even when rugged and unkempt, enraptures as Vedha is peeled layer by layer.

Give it to Pushkar & Gayatri for a storytelling skill that begins with Vikram and his department in hot pursuit of Vedha with no doubts about who’s on the right side of the line and who’s in the wrong. But each time Vikram’s handcuffs come out to catch him, Vedha has a nuanced story to tell with the former’s frown furrows getting deeper as the latter takes him to a point where the lines between cop and criminal get blurred. Animosity too melts en route.

The double victory comes from two spheres. One, the compelling performances of Saif and Hrithik. Just when you begin to feel that Hrithik carries the show, you realise that Vedha alone wouldn’t have worked so effectively without the solidity of Vikram. The second is the unique, layered style of the husband-and-wife duo that has the viewer intrigued while it pushes the story forward with awesomeness in the visuals (PS Vinod) and in the action (Parvez Shaikh and team), played out with a signature background score (Sam CS).

Each time Vedha has a story to tell, there’s a twist in the slumdog’s tale. You meet his younger brother Shatark (Rohit Saraf), as far from crime as Vedha is steeped in it, Shatark’s childhood partner Chanda (Yogita Bihani), Babloo (Sharib Hashmi) the loyalist, proud to be a gangster and not some smalltime thief, and a sprinkling of more from the grime and crime universe.

Vikram has lawyer-wife Priya (Radhika Apte) and a team around him including Abbas (Satyadeep Mishra).

Words (dialogues by Manoj Muntashir & Benazir Ali Fida) are just as important as action in the world that Pushkar & Gayatri create, taking the viewer through a maze of stories where action drops in, hard-hitting and unapologetic.

Hrithik is muscle-impeccable in soft moments with Shatark and rough times with gangsters, and quicksilver smooth in ‘Alcoholia’, the sole dance number in the film.

Saif has the difficult assignment of holding firm in a character that doesn’t have as many shades as the man before him and he pulls it off much the same way as he did in earlier films like Kal Ho Naa Ho and Tanhaji.

There is sophistication in the manner the directors unfurl their story, making it a film for a cross section of audiences, the multiplex and the single screen, the young and their families, as there’s neither crudity in the dialogues nor voyeurism in the visuals.

But it is not a perfect film.

For one, there are sequences that run on and on, especially in the climax.

Two, when you think of it, there really is no romance except for brief, antiseptic moments with Vikram-Priya and Shatark-Chanda. I didn’t really miss romance as a necessary ingredient but maybe by strengthening that department, the writers could’ve brought another watchable element into their story.

Three, missing is a chartbuster. ‘Alcoholia’ is energetically choreographed (Ganesh Hegde) and performed. But you don’t go home with any lingering memory of a tune. Kya hua, Vishal-Shekhar?

And lastly, it is so word-heavy in places that you don’t grasp all of it. Perhaps a repeat audience might just go back to see what it didn’t get the first time around.