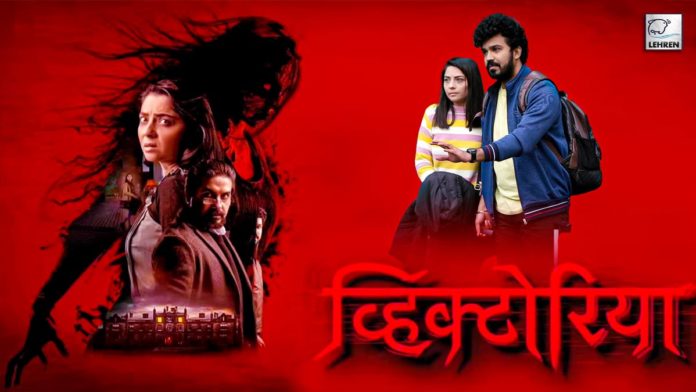 In spite of being fairly affordable, gothic horror is one of the least explored genres in Marathi cinema. Not particularly because of lack of budget, yes it might be one of the reasons, but more than that the main reason is our filmmaker’s uncertainty about whether to stick to logic or simply adhere to the usual cliches of the genre. Sonalee Kulkarni, Pushkar Jog and Aashay Kulkarni starrer Victoria tries to find the middle ground between using the usual cliches of the genre while also trying to stick to logic, but it has its fair share of problems.

The premise is simple. A married couple, Ankita (Sonalee Kulkarni) and Siddharth (Aashay Kulkarni) have arrived in Scotland to spend a few days in hotel Victoria in order to work on their relationship. They are welcomed by hotel’s owner Adhiraj (Pushkar Jog) who lives there alone after the accidental death of his wife Renuka.

This hotel is situated in a faraway secluded place and is surrounded by vast empty fields with no direct access to the outside world. This is a perfect setting for things to go wrong for this young couple, and they do. Ankita has gone through a mental breakdown, and the couple has arrived here to spend some time alone to once again rebuild their relationship. But it seems there is more to Adhiraaj’s sad tale and what is hidden behind the restricted corridor of this hotel?

Ankita soon starts sensing a presence of some woman in the hotel and as she decides to get to the bottom of things, she realises that nothing is what it seems. And there might be some sinister explanation behind her sensing the presence of some unknown woman.

The idea is simple but quite effective and the film also tries to stay within the realm of possibility without breaking any pre established frame of logic. Despite some unavoidable cliched scare tactics, the first half works quite well, especially because the director duo use the isolated location to good use. I especially liked how the film doesn’t resort to special effects or other cheap tactics in order to create a sense of dread and instead it effectively uses filmmaking skills such as innovative camera movements, and production design to make us aware that not everything is as it seems in this hotel.

But as we move to the second half, the film slowly starts to lose its grip. One of the reasons for it is that the director duo move from using visuals to dialogues to move the plot forward. The set up of an isolated hotel works well with the film but somehow, writer and director duo Virajas Kulkarni and Jeet Ashok don’t utilise the setting to its full advantage.

Another thing that I found quite irritating was that the film tries to keep us in the dark about the ongoing relationship issue between Ankita and Siddharth. And finally when they decide to reveal some information about the  problems the couple is going through, the film resorts to simple explanatory dialogues instead of using visuals. And the way they interact In the first half the film uses visuals and its setting of an isolated hotel to good use to build a sense of dread but as we move to the second half the storytelling moves from visuals to dialogues. And these exposition-heavy dialogues soon start testing your patience. Even the simple interaction between a couple starts sounding preachy. And this continues on till climax. In fact the climax also fails to leave the desired impact because of these exposition heavy dialogues.

The twists are fairly predictable especially if you are someone who has watched ample horror and mystery thriller movies. So by the time the film reaches its climax, you are only waiting there to see how many of your guesses were correct? Also not all scare tactics used in the film work. One wishes the filmmakers had come up with some unique and new ideas to create a sense of dread among the viewers but for the most part they are fine by resorting to those cliched scare tactics that we have seen in numerous horror films.

These cliched tactics have become quite outdated and frankly it’s high time they come up with something new and unique to instill a fear among audiences.

But in spite of these shortcomings, Victoria gets few things right and deserves full marks for the honest attempt of the makers. As mentioned earlier, the director duo don’t depend on special effects and instead use filmmaking craft to instill a fear among the audience. Choices made about the camera angles, its movement, and lighting can often give us a better idea about the story and what’s going on in the character’s mind than words, and that’s exactly what we see here, at least in the first half. The movie is also pleasing to the eyes, especially considering its budget. The thing that I liked the most is the use of music. The filmmaker duo knows when to use music and when to let the silence do the talking?

It’s good to see Sonalee Kulkarni in a female centric role, and the actress does full justice to her character. Her initial inhibition to express her honest opinions and her reclusive attitude give us a fair idea about Ankita’s inner turmoil. Pushkar Jog also does a fine job as a mysterious man who is also harboring some pain. It’s good to see the actor in a serious role other than his regular rom coms. Aashay Kulkarni’s portrayal of Siddharth left me a little perplexed. I won’t reveal too much to avoid spoilers, but his style of acting mostly drifts towards theatricality. And he does go overboard a couple of times, but I’m not sure whether it was his own doing he was simply asked to act like that.

All in all, Victoria is a below par horror drama that had a lot of scope of improvement. However this fairly watchable horror drama is a step in the right direction for horror cinema fans in Marathi.

In spite of being fairly affordable, gothic horror is one of the least explored genres in Marathi cinema. Not particularly because of lack of budget, yes it might be one of the reasons, but more than that the main reason is our filmmaker's uncertainty...Victoria Review: Fairly Watchable Horror Drama With An Ample Scope Of Improvement