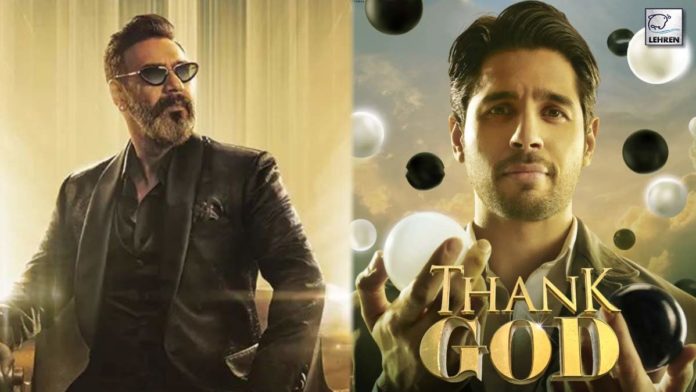 Thank God is a fantasy comedy film written and directed by Indra Kumar. It features Ajay Devgn, Sidharth Malhotra and Rakul Preet Singh. The film is produced by T Series.

The official remake of the Danish film Sorte Kugler, director Indra Kumar Indianises it well with charming but broke estate agent Ayaan Kapoor (Sidharth Malhotra). The smooth, easygoing Ayaan who fibs and can’t look beyond himself, meets with an accident and encounters Yama Dhoot and Chitragupt up there before he comes back to earth with a thump. Indra Kumar also adds a dash of Norah Fatehi’s ‘Manike… Man haari, tan haari, sukumari,’ for a massy ‘dhak-dhak’ moment.

Suited-booted Hindi-spouting CG alias Chandragupt (Ajay Devgn), known in India as the supreme ledger-keeper who keeps a check on the deeds and misdeeds of those coming in from below, explains to Ayaan that this is how they are coz celestial Sanskrit would be lost on earthlings.

Ayaan has to play CG’s Game Of Life and accrue enough on the white credit side if he wants to return to earth. “You play games up here as well?” enquires the cheeky Ayaan. CG makes a nod to India’s most popular game show and reveals that when an important person had an accident (a reference to Amitabh Bachchan’s serious mishap on the sets of Coolie), he’d also come up for a brief while and had taken the idea of a game show back to earth. Copycat KBC.

Through several rounds of the game, Ayaan comes face to face with anger, lust, greed, insensitivity and other major failings that’ve been a part of his character. There’s an unfolding of his life with wife Ruhi (Rakul Preet Singh), his mother (Seema Pahwa), his father (Kanwaljeet) and a big bad lie, until he learns to live selflessly.

Sidharth has the requisite handsomeness to carry off the rake who can’t take his eyes off Norah Fatehi’s moves on telly or be irritable and insensitive most times. It’s a wide-ranging role and Sidharth pulls it off with a high likeability quotient working in his favour.

Ajay Devgn has earned the status of a stern superior being but CG is inherently one-dimensional without variation or colour.

Aakash Kaushik’s writing is about lessons to be learnt on piling up good karmas which isn’t an inspired novel thought. We’ve seen it all in the 70s and 80s with Jeetendra’s and Sanjeev Kumar’s movies. And, unfortunately, while there’s the usual Indra Kumar breeziness, it’s more flat out preachy than laugh out comedy.

Ultimately, we can’t have such a goody-goody mirthless Diwali, can we?