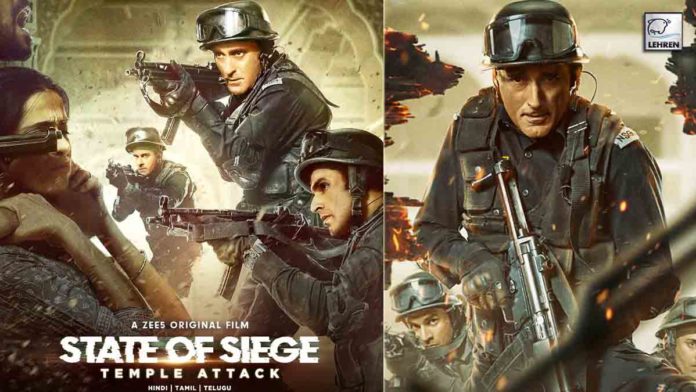 That’s the bane of creator Abhimanyu Singh and director Ken Ghosh’s terror film.
Major Singh (Akshaye Khanna), a skilled NSG officer, defies the orders that emanate from a tent pitched safely away from the scene of action. He knows what’s urgently required on the ground. And you know that even after rescuing a minister’s kidnapped daughter and nabbing a bigtime terrorist, the senior in the tent will keep reminding Major Singh that he’s undisciplined.

When Singh loses close associate Captain Vivek (Akshay Oberoi) in the operation and loses his skills for a while, you know that he’ll get his redemption. It does when the same bunch of Pak-trained terrorists who want to wreak havoc on India and ‘kaafirs’, target Krishna Dham temple in Gujarat. They can’t bear the peace and harmony that has returned to Gujarat.

The list of devotees who troop in is as per the laundry list. In today’s times of selfies and mobile phones, one person in the family who goes back to the car to bring the camera will end up watching the terror attack from outside. A father and son separated. A young guide who mixes Gujarati with English as he escorts two women, a foreigner and an Indian, into the temple complex. A teacher with a large group of school children.

You get the picture of who’s inside the temple when terror strikes.

Terrorists and handlers spout Punjabi and filthy abuses alongside ‘Insha Allah’ and ‘Allah-ho-Akbar’. The NSG on this side don’t go beyond the occasional eff word.
But, in keeping with Hindi cinema’s self-written version of ‘Sabka saath…’, the mandatory balance comes with a Hindu Gujarati turning traitor and a Muslim inside the temple lecturing the terrorists on insaaniyat, humanity over religious terror. And the foreigner will be ballsy enough to tell the terrorists that she’s not scared of them.
To be fair, there are moments that are effective. Like the terrorist taking a hostage to the terrace and sending a message to the Indian government by shooting him before a crowd of spectators gathered outside the temple.

But the ennui of predictability and scenes seen before, like a Major whose wife is delivering their kid while he’s on duty, make it a tiresome watch.

Akshaye Khanna is always competent though I would have liked to see more of Akshaye and Akshay. Interesting actor Akshay Oberoi alas, makes only a fleeting guest appearance.