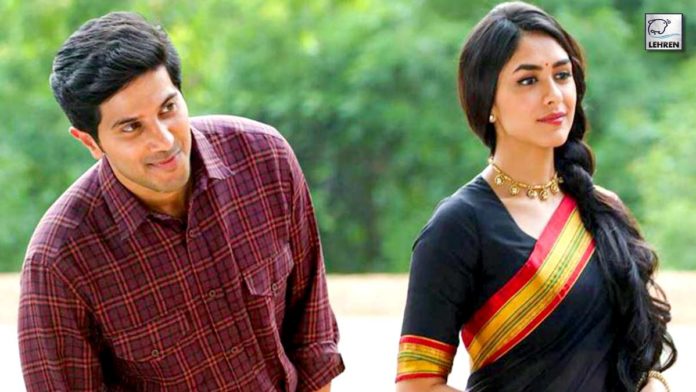 After the commercial success of Telugu film 'Sita Ramam' in the South belt, the makers have released the film in Hindi today. It features Dulquer Salmaan, Rashmika Mandanna and Mrunal Thakur.

An entitled Pak-origin Afreen (Rashmika Mandanna) spews hate against India in London. But when she discovers that she can’t get her hands on the inheritance from her late grandfather Major Tariq (Sachin Khedekar) until she has personally delivered a letter to Sita Mahalakshmi (Mrunal Thakur), she has to fly to India. If she can’t find Sita, maybe it would help to trace Lieutenant Ram (Dulquer Salmaan) who wrote that letter 21 years ago in 1964?

The bigot in Afreen who begins with stomping, “Are all people here called Ram, Sita and Balaji?” slowly makes discoveries that melt pure venom into understanding and appreciation.

Writer-director Hanu Raghavapudi lays out a love story that’s leisurely told and is novel – it’s not a cross-border romance to begin with. Lieutenant Ram and Sita Mahalakshmi, the love of his life, are both Indians and their love story unfolds in layers for Afreen and for the viewer. Alongside their beautifully different romance is also Lieutenant Ram’s tryst at the border that brings him face to face with his Pak counterparts. Sponsoring terror and Pak army propaganda against India is the dominant presence. But the just and valorous Ram also meets an ethical Major Tariq on the other side.

There are plenty of watchable moments like Ram from the Madras Regiment who has done India proud in an encounter with Mujahideens, telling a broadcaster that he’s an orphan, leading to a heap of mail for him from all over India. Among them is Sita who writes as his wife but sends him letters without an address, setting him off on a journey to find her.

There’s much to recommend in this surprising Hindu-Muslim love story which is one of the twists in the tale. Without dwelling too much on faith, Ram, Sita, Tariq and Afreen are all intertwined.

It does have its faults. Like the rather enforced track of a Prince from Oman that’s made to look like the palace in Hyderabad is in dire financial straits. But once that distraction is done with, there’s no financial distress in sight.

The narration too goes back and forth between 1964 and 1985, taking a while to get used to the two time periods. There are also a lot of characters coming in and out, some of them quite unnecessary. Like Jisshu Sengupta as Sita’s brother, Prakash Raj in an inconsequential role and a track on Ram meeting his ‘sister’.

All of this contributes to make it a long watch which demands patience from the viewer.

But the turns in the story make it interesting with the gradual unravelling of the romance and the army intrigues. Dulquer Salmaan is a charmer, Mrunal Thakur is pleasing, Rashmika Mandanna is effective and Sachin Khedekar oozes kindness.

A wrap-up line would be, it’s a good watch but could’ve been tighter and better.