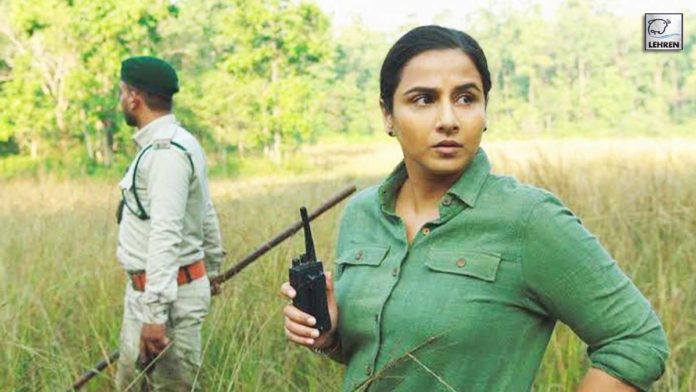 Sherni is a Hindi film starring Vidya Balan and is currently streaming on Amazon Prime Video.

Set aside entertainment and let’s talk about the environment. Director Amit Masurkar who was in his element in the jungles and far beyond civilisation in his Oscar entry film Newton, treks into the same sort of terrain once again. This time, it’s not about polls and elections but tigers, jungles, humans and their inter-connection. Important territory that must be visited by sensitive cinema.

When Divisional Forest Officer (DFO) Vidya Vincent (Vidya Balan) arrives in her new posting, away from husband Pawan (Mukul Chadda) who’s in Mumbai, the many characters who introduce themselves unfold the story. Bansal (Brijendra Kala), her senior, who’s just not clued in, is not going to be a productive colleague for sure.

Professor Noorani (Vijay Raaz), sensitive to the environment with a firm belief that the jungle and the villagers are interdependent, will back Vidya all the way. Political opponents GK (Amar Singh Parihar) and PK (Satyakam Anand) who’ll wrest any situation to score electoral points will play spoilsport. And clearly, Pintu (Sharat Saxena) who boasts that he can look a tiger in the eye and tell whether it’s a man-eater or not, is a hunter whose skill will only be in the kill.

Caught in the centre is T12, the tigress who’s on the prowl.

Cameras that track T12 and aid Vidya’s team to plot her movements and predict where she’s headed, sundry seasoned assistants who can identify every animal in the jungle, who know leopard’s poo from a tiger’s and can tell at one glance whether a victim was killed by a bear or a tiger, add authenticity to the atmosphere. With the tiger lurking somewhere all the time. As one dialogue puts it, although you may spot a tiger only once in 100 times, it’s a certainty that the tiger has seen you 99 times.
The bleat of a petrified sacrificial goat, the playfulness of a kitten that’s strayed into Vidya’s house, the majesty of the tigress and the innocence of her two cubs, work to make the heart beat fondly for the four-legged.

Co-existence cannot be sacrificed for highways and coal mines that bring conflict into the lives of villagers and animals: Aastha Tiku’s story has the right core.

But all isn’t right with the story-telling. Playing politics over a dead body or leaders, officials and hunters being in cahoots with one another, doesn’t come as a surprise. From this gang, you don’t expect sensitivity towards a tigress and her cubs or towards villagers who face a real daily problem of livelihood.

Apart from too many characters, the pace is a problem as there’s much repetition which isn’t always required for characterisation. For instance, we get it that Bansal prefers poetry, singing Hindi film songs and partying to responsibility. Masurkar didn’t have to make the point so often and prolong the film unnecessarily.

Perhaps Masurkar also tried to pack in too many messages. Like Vidya’s mother and mother-in-law wanting her to be a stereotype which Hindi cinema has dealt with too often to be really needed here. Or the scene about women making bamboo products which doesn’t quite go anywhere.

Sticking to the parallel stories of the DFO battling hierarchical apathy while wrestling with an annoying personal life would’ve sufficed as a substantial premise. With Vidya Balan’s efficiency and don’t-mess-with-me presence topping it off.

Must Watch: “Half hour of Lust Stories did more for me than 40 films as hero,” Sanjay Kapoor’s Exclusive To Bharathi S Pradhan

But two final scenes do a beautiful wrap up. One, a repeat of Vidya’s first day at work which reiterates that characters change but the system doesn’t, is a cynical reality. And two, Vidya in the taxidermy section, looking closely at a range of animals, their eyes flashing the stories of inhuman humans, evocatively retell the saga. It’s this scene that asks the question, does winning a few skirmishes, like reading the law to Pintu and sending him packing one night, amount to victory when the war is still raging?