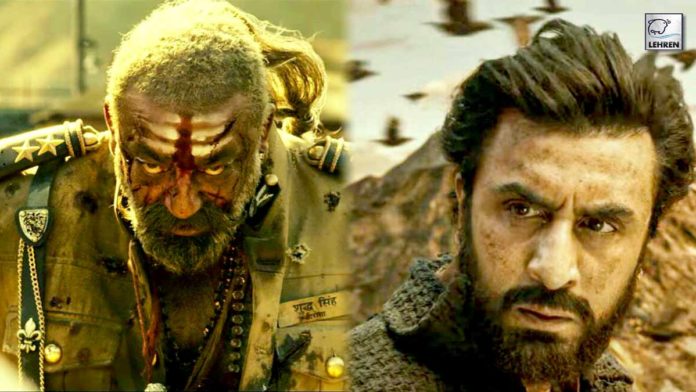 If one were to look at it dispassionately and from a distance, one would lament the money going down the drain and some extremely well executed action set pieces which alas will go unnoticed given the general chaos.

The grotesque revulsion of chained misery in a dystopic world that KGF showcased is multiplied several times by screenplay writers Ekta Pathak Malhotra and director-husband Karan Malhotra. Right down to Sanjay Dutt playing a repellant antagonist. This time with layers of holy ash smeared on his forehead and a Brahminical tuft of hair that he tosses villainously as Daroga Shuddh Singh. Making this obvious upper caste the chief sadist who whips and kills an inferior sect of Hindus is offensive to say the least especially when the fight of this downtrodden group of people is with the British. But the British come out smelling of roses against the maniacal cruelty of the ash-sporting Hindu.

Perhaps the overriding need to establish one community as perpetrators whatever the era is symptomatic of problematic writing and execution but that’s really not the sole reason why Karan Malhotra’s period epic is such a disaster. The writing and the focus on the unpalatable Daroga are major contributors.

The Khamerans, a tribe of chhoti jaat that just wants its freedom to live with dignity, are tricked by the Daroga into believing that the Brits will free them from their chains if they give up their traditional land where the river gurgles. To get them out of the hellhole they’ve found themselves in, leader Shamshera (Ranbir Kapoor) will go to any lengths. He even allows himself to be stoned to death by his own wife and people and die branded a bhagoda just to protect his people. Only his wife and Ronit Roy playing some sort of Baba or guide know the truth about noble Shamshera and his sacrifice. But don’t ask why they don’t share this for 25 long years with the rest of the tribe or with his son Balli (Ranbir Kapoor) who grows up believing his father was a cowardly absconder.

And so the misery continues as the children of deprivation are chained, beaten up and treated like keede (worms) inside a prisonlike fort. With Indian sepoys and the Daroga with disgusting gold teeth perpetrating most of the cruelty.

But strangely, Balli is free to prance around with Sona (Vaani Kapoor), the local dancer, who belongs to the more privileged world outside.

Hope arrives only when Balli finally turns into Shamshera, the hope of the Khamerans, in a long overdue moment. He and his gang turn dacoits to gather gold for their freedom from the British – the quest his father had left unfulfilled.

A vulture and birds to the rescue come and go without any reference point.

In the midst of much death and killing by Daroga and company, Sona keeps nagging Balli, “Why did you rescue me?” which is supposed to be fiery and funny.

With mayhem all around, there’s an ‘Ishq’ song and lovemaking with ‘Sa re ga ma pa’ notes in the background score. What a time to romance and make babies.

The background music deserves a review of its own. ‘Shamshera’ is the background word for the hero. When guns go on a killing spree as they do all the time, there’s ‘Mitna toh baaki hai’ blaring in the background. Another background score has a kid spouting gibberish and a foreboding giggle, a sound that foretells, Daroga is here to kill a few more. Instead of quietly hiding, a pregnant Sona screams, attracting the Daroga’s attention. It’s a Brit officer who saves her from this menace in khaki uniform. And it’s the Brit who understands that the Khamerans are gathering gold for freedom because they know of the greed and corruption that’s embedded in the empire.

Like a spaghetti western, there’s a whistle and a score with dust flying around before Shamshera arrives on a horse.

Characters like Saurabh Shukla spout long, misplaced dialogues with rhyming lines that only serve to further drag the pace. Shamshera and Balli have lines like, ‘Karam se dacait, dharam se azaad’ trailing them.

Daroga and Balli beat each other to a pulp every 20 minutes and live to fight again. Until Shuddh Singh is flogged and stoned to death exactly like Shamshera was. This time there are conch and temple bells in the background score.

Among the many ‘cuttable’ songs and sequences is ‘Toko salaam’ which introduces Balli and a bunch of grimy-deprived kids. If you watch closely, it is well choreographed but like the action sequences, what’s the point when the rest is such a mess? It’s not just the film. Shamshera is the kind of misadventure where even the performances can’t be praised. It really is time for Yashraj Films to do a spot of self-introspection.