Shiddat Review: A Film Only For Die-Hard Romantics 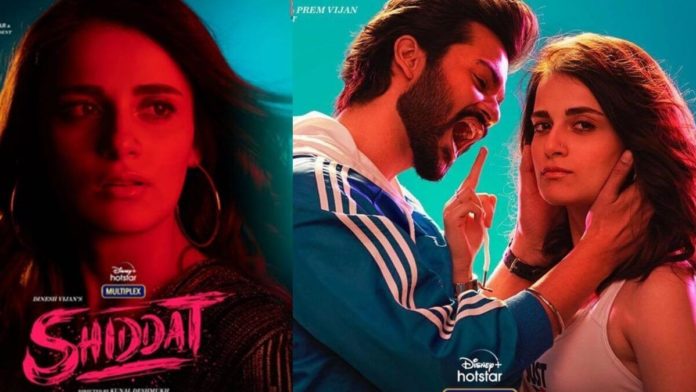 Perhaps the best part about this obsessive love story is that there’s freshness in the line-up of performers. It is a relief to watch a bunch of faces that are still to make it to stardom, a change from far too familiar actors who spell boredom.

It’s also neat that the narrative stays focused on its four lead players without bringing a horde of back stories and families into it.

So this energetic, eager, and pretty thick-skinned guy named Jaggi (Sunny Kaushal) who gatecrashes weddings and makes himself comfortable, falls in love with London-based Kartika (Radhika Madan) when she’s coming out of a pool. She’s training in India for the championships.

Meanwhile, at the wedding reception of dignified IFS diplomat Gautam Kapoor (Mohit Raina), the groom toasts his bride Ira (Diana Penty) with confessions on how he’d have gone to the ends of the world to get his girl.

Guess who gatecrashed the Gautam-Ira wedding and drew inspiration from those cheesy lines?

That’s the template director Kunal Deshmukh takes off from to tell a l-o-n-g tale about Jaggi doing everything against the rule book to enter London and claim Kartika before she weds her fiancé.

Much time is spent first on building the chemistry between Jaggi and the much-betrothed Kartika before she flies home to get married. An unplanned one-night fling before marriage is something she can handle and put behind her.

But Jaggi, the spirited ‘Yamma yamma’ type who’ll break into a robust dance instead of going into broken-hearted Devdas mode, isn’t so blasé about it and will gamble till his last breath to get the love of his life. For a guy who just weeks ago drowned in the swimming pool and was saved by Kartika and her CPR which he insisted was a kiss, Jaggi is desperate – or reckless – enough to even swim the English Channel to reach London.

Given that level of lunatic desperation, all that Jaggi the lover does, borders on the implausible. But there it is. There are the passionate who’ll stop at nothing. But at least they know what to chase.

Kartika, on the other hand, is not so clear-cut about what she wants. Until she too learns to plaster a bleeding heart with a ‘Yamma yamma’.

A bit inconsistent is the extent to which straight-laced diplomat Gautam Kapoor who always has a plan before him, tweaks his principles to help Jaggi in his crazed quest. But in doing so, he who has clashes with his activist-wife Ira, gets a tutorial on love from Jaggi.

My one line on Kunal Deshmukh’s direction is, don’t stretch a good thing until it begins to make you drowsy, and do keep it a bit more real. We accept that cinema requires the viewer to take a leap of faith but overdoing the improbable has its limits.

To return to the beginning about the performers, Sunny Kaushal who was impressive as the sardar in Gold, carries off the slightly nasal Punjabi Jaggi with casual ease and the right amount of earnest passion. This is not to say that he has arrived as the next best thing in town, it’ll take a few more movies to get that far. But he does make a good beginning.

Radhika Madan, seen in films like Pataka and anthologies like Ray, performs credibly as Kartika. But there is a uniformity in her dialogue delivery that does not vary from film to film. It’s early days for her too, so maybe she could make an effort in that direction.

Diana Penty looks ravishing but doesn’t have much to do as Ira the activist-wife. Tall and dimpled Mohit Raina as Gautam is the one with the most interesting screen presence. After walking off with the best role in Mumbai Diaries, Mohit once again compels you to watch him. But hey, what’s with this hairstyle where his hair stands stiffly six inches above his head?

ONLY FOR DIE-HARD ROMANTICS Shiddat Review: A Film Only For Die-Hard Romantics