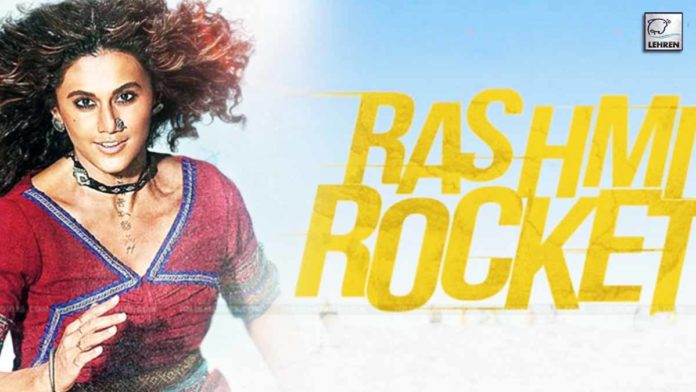 Rashmi Rocket is a sports drama film featuring Taapsee Pannu in lead. The film will be released on 15 October 2021 on ZEE5.

The last time writer Kanika Dhillon and you collaborated on a film called Haseen Dilruba, I unequivocally told both of you just how faulty its faux feminism was. Prior to it, I had also called out Anubhav Sinha for a weak Thappad, for weaving an unconvincing narration around a strong social comment. Where had the substantial Taapsee I’d admired in Mulk, Pink and Badla disappeared?

Happily, I see her on track – quite literally – as Rashmi Vir, the girl who prefers trousers to frocks and outruns the boys in her village. With a father (Manoj Joshi as Ramnikbhai) who provides the wind beneath little Rashmi’s wings, it’s consistent that she grows up with the same confident stride, rides a mobike, faces deriding ‘Chhora ya chhori?’ comments and is not beyond delivering a sharp slap to somebody’s abusive husband in the village.

Even if her testosterone levels are higher than that of the average young woman, story writer Nanda Periyasamy’s Rashmi is actually blessed. To have had a father who spurred her on with the chant, ‘Haar jeet parinaam hai, koshish hamara kaam hai (Winning and losing are but results; to do our best is our duty)’. To have mother Bhanuben (Supriya Pathak) who doesn’t let her quit and comes with the quip, ‘Bhaagte bhaagte kab bhagodi ban gayi? (While running all the time, when did you become a runaway?)’ To have dapper Captain-turned-Major Gagan Thakur (Priyanshu Painyuli) discover the speed under Rashmi’s feet, urge her to turn professional athlete and stand by her in every war as admirer/boyfriend/husband. His motivational reference to Rashmi running towards a landmine is so well placed. All of this topped with lawyer Eeshit Mehta (Abhishek Banerjee, always competent) who lands up at her doorstep to fight her case. You can’t get luckier than that.

When the queen of the race track is discredited with an unjustified gender test orchestrated by a well-connected rival and her influential father, the media jumps in asking, ‘Is the Rani actually a Raja?’

Kanika Dhillon, please take a bow for dialogues that are appropriately smart and not smart alecky just for effect. Additional dialogue by Akarsh Khurana (who’s also directed the film deftly), Aniruddha Guha (who also gets the credit for screenplay) and Lisha Bajaj, keep the narrative and the lines on track without distraction. It’s a wholesome, straightforward narration with flashbacks kept to the minimum, like the much-needed one to show what happened to her father and why Rashmi has been running away from herself in the aftermath of that destructive 2001 earthquake in Bhuj on Republic Day.

What also polishes the rural setup is that none of the high drama has maudlin melodrama. The best part of course is that as a discourse on the pernicious practice of gender testing which, as lawyer Eeshit puts it in court, comes with a social stigma that ruins the life of many a female athlete, it scores high on every point and makes Rashmi Rocket one of the finest gender sensitive films of recent times. It is topped off with Rashmi’s insistence, even against odds, that this be a fight not to prove only her femininity but that of all women who’ve had to face a gender test.

But Taapsee, the film is not flawless. There is a curious, ‘When did this happen’ moment when your mother, who has always fought against your tomboyishness, has an inexplicable (but welcome) transformation as Bhanuben, the businesswoman, the supporter of women’s rights in the village and the provider of unending encouragement to her gifted daughter.

There is too, a wee bit of bowing to convention when you break into the peppy ‘Very sorry re’ number, dressed uncharacteristically in a sexy ghagra-choli that could never have attracted a gender test, or when you start wearing feminine kurtis once Gagan and you are a couple.

What triumph are the writing, direction and the winning performances by you, by Priyanshu who oozes a Sushant Singh Rajput kind of charm, Manoj Joshi and, even if we’ve seen her display the same accent ever since Sanjay Leela Bhansali’s Ram Leela, Supriya Pathak who makes a convincing tender-tough mother. Lawyers Abhishek Banerjee and theatre artiste Zafar Karachiwala who comes with a touch of arrogance, face off well in the courtroom.

Amit Trivedi’s music also blends well with the general tone of the film.

I hear people say Rashmi Rocket sounds like Laxmii Bomb, so they’re put off. But viewers, do put that thought aside, this is worth a watch.