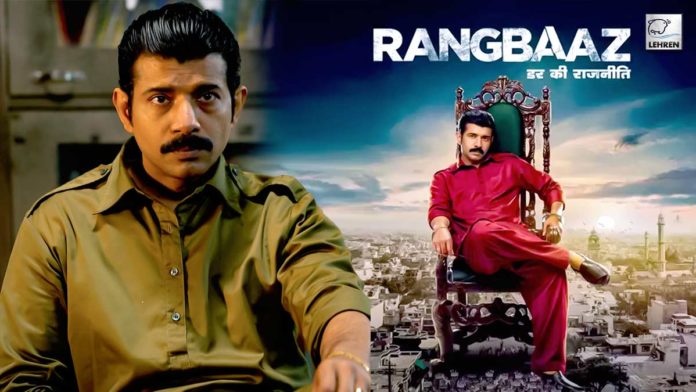 For sure, a canny Chief Minister placing his clueless wife on the CM’s chair before marching off to jail for a fodder scam, a mahagathbandhan (a political arrangement) between two inimical leaders of Bihar solely to grab and retain power, seat sharing deliberations and adjustments as each covets the CM’s post, booth capturing, electoral violence, resort politics and a don who has power as an elected MLA, are familiar scenes from Bihar and UP. For who doesn’t know about the Nitesh Kumar-Lalu Yadav alliance, or about Yadav declaring anpadh wife Rabri Devi as the CM when he was incarcerated in the fodder scam, or about Lalu’s close aide, Mohammed Shahabuddin?

Director Sachin Pathak recounts a familiar tale and he starts off on the right note.

A couple on the railway track, ready to end their lives.

The entry of sheer power with all hands reflexively joined in a reverential namaste.

Hot-blooded even in childhood and a duffer in studies, early humiliations make Haroon resolve that one must be powerful, shaktisheel to survive in this jungle. He wades into the political jungle for the power he thirsts for, spouting ‘Manch meri majboori, shauq mera shamsher (weapon)’.

Dancing around ‘Saheb’ as Haroon Ali fancies himself, is his sea of minions and beneficiaries.

But CM Mukul Kumar (Rajesh Tailang) and fierce opponent Lakhan Rai (Vijay Mourya) have got into a political huddle. Though Lakhan Rai is Shah Ali’s mentor, twists in political fortunes may soon leave the gangster-Robin Hood out of the Kumar-Rai cuddle.

Writer Siddharth Mishra and Series Runner Navdeep Singh have a fine cast to recreate the wild and wily politics of Bihar. Vineet Kumar is outstanding as powerful Haroon Shah Ali Baig, even the worry lines on his forehead surfacing as the heat is turned on him. Akansha Singh as Haroon’s pretty wife Sana, Geetanjali Kulkarni as Ahilya Devi, the mother figure who’s seen through Haroon’s cruel reality and fights him, Prashant Narayanan as DIG Raghav Kumar and the two veterans, Rajesh Tailang and Vijay Mourya, make the politics of Bihar entirely credible.

There are nice touches too. Like Haroon wooing Sana with a book by Dr Rahi Masoom Raza and commenting, “Can’t believe he also wrote the dialogues of Disco Dancer.” A barber holding Haroon back for just a second before he’s released from jail to trim an errant white hair that’s crept in, showing the passage of time.

Sneha Khanwalkar gives a short signature tune for Haroon when he’s on the verge of a kill and Kailash Kher goes into full lung power with ‘Kya aham main…sab maathi hai…’ when the end of Robin Hood is nigh.

It’s also refreshingly real that despite being shielded by another community during a communal riot, Haroon grows up to do what he does, instead of trying to paint him as gratefully noble.

But with all this realism and some inspired performances, the narration is confusing. There’s eternal confusion over the timelines as it swings around the 90s, early 2000 and 2010. There’s confusion for a while over who’s Chhote Babu and why he is in jail. Who’s Brijesh and why is on the run?  How does Haroon go on hospital rounds when his mentor Lakhan Rai is still behind bars and his wife in the CM’s chair has stalled all his work? Confusion prevails also when a witness called Brijesh is dead but the scene shifts to a condolence visit to Ahilya Devi on the death of her son, Deepesh Kumar.

Some of it gets untangled later but the dizzy timelines still require some time to be figured out.

And so, what could have been a gripping retelling of Bihar politics loses a part of its mojo in the confusion of the screenplay.