Review | Rocketry: The Nambi Effect – Packed With Fuel But Doesn’t Quite Land 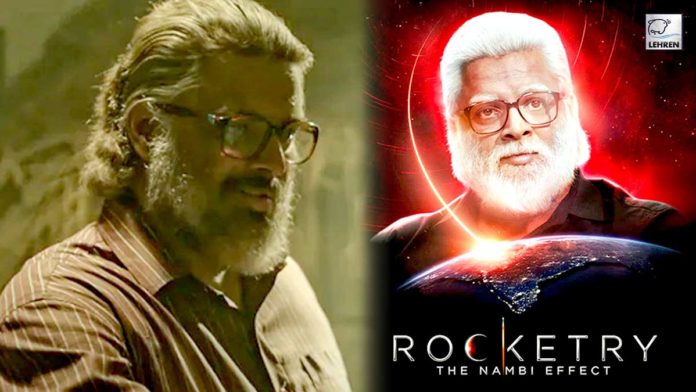 Rocketry: The Nambi Effect is a biographical drama film based on the life of former ISRO scientist Nambi Narayanan. It is written, directed and produced by R. Madhavan, also featuring him in the lead role.

It’s a wonderful story of scientific genius and a conspiracy that not only truncated a brilliant mind and defamed him but also had ramifications on India’s nuclear capabilities.

Writer-director-actor R Madhavan relates the life of Nambi Narayanan through hark backs to the past. The story unravels in bits as Shah Rukh Khan interviews the ISRO genius.

Opening with the uplifting chant of the Tirupati suprabhatam, Nambi has a regular happy family in Kerala.

Stones are thrown, the family is socially ostracised, in the office bus, on the road, in the temple, at a function.

Nambi Narayanan is thrown into jail and tortured, the label of ‘spy’ and ‘traitor’ affixed on him. He slept with a Pakistani woman, allege the policemen who rough him up during interrogation, and sold India’s rocket secrets to the enemy country.

In Nambi’s ensuing fight to prove his innocence, when the third degree and the feeling that he’s up against a brick wall drive him to despair, his children tell him piquantly that he cannot give up until he clears his name. Or his children and grandchildren will forever have to live with the stigma.

Most of us know Nambi’s story. How he was falsely accused of espionage in 1994, cleared by the CBI in 1996 and fully exonerated by the Supreme Court in 1998. In 2018, the Supreme Court also awarded Nambi a compensation of Rs 50,00,000 to be recovered from the Government of Kerala, a sum that was reduced to Rs 1.3 crore by the state government but is still to be paid in full to him. The highest court of the land also asked for an enquiry into the role of the policemen who had conspired against Nambi.

Madhavan tells it all. And it is a story that has everything you’d want in an inspiring real-life thriller. In the film, the first glimmer of hope comes when a CBI officer reports to his boss in Delhi that the simple lifestyle of his family wasn’t that of a spy who sold his country for the top buck. The officer also reports that it was a big frameup, a huge conspiracy to trip the brilliant scientist who dreamt of making India nuclear independent.

There are several peeps into Nambi’s life. His days in Princeton, his clever ways of getting what he wants. Like landing up at Professor Crocco’s house, offering to help with household chores and take care of his ailing wife if only he’d agree to take him on as his student. There are flourishes of humour: Nambi winning over Crocco with, “I make the best omelettes in the world” and then asking a friend in the University to teach him how to make one.

The glimpses into his genius are many: a Eureka moment when Nambi’s making an omellete and comes up with an audacious theory that Crocco endorses. Proving that a textbook has got it wrong in Princeton. Arming rocket technology with liquid fuel engines, his VIKAS engine successful in every rocket launch to this day.

The brain ticks in different ways going beyond science. Going to France with his colleagues, pretending not to know French only to hear and learn all their scientific secrets. Striking impossible deals in France and Russia to accelerate India’s nuclear programme. Getting the engines he wants from Russia and planning to route it through Karachi to hoodwink the Americans. Escaping from Russia on snowmobiles like a James Bond adventure before taking off in a plane.

There’s also a mission-driven urgency in the man to the point where he insensitively hides from a colleague the information that his little son back home has died, only to ensure that their work in France continues uninterrupted. Desh seva over his colleague’s familial tragedy.

Until the conspiracy blows up Nambi’s life and work.

It is a fascinating story that had to be told.

R Madhavan is so effective as Nambi that you feel they’re one. As a filmmaker, Madhavan’s efforts at telling an authentic story is apparent and compliments to him for creating the world of Nambi with such sincerity.

But, and this is big but, despite such wonderful material to play with, the narration of Nambi’s story is not engrossing. It’s largely because while many of the dialogues are in English, the scientific jargon involved in rocket science, in liquid fuel engines, the VIKAS engine and cryogenics, will be pure Greek to most viewers. The manner in which such a compelling story unfolds also doesn’t pack a punch. If only the writing had been skillful in bringing out and coalescing the humour, the brainwork, the international romps for research and nuclear deals, the conspiracy, and the toll it took on Nambi and his family, and on India’s rocket programme, Rocketry: The Nambi Effect would’ve been an overwhelming and nail-biting experience.