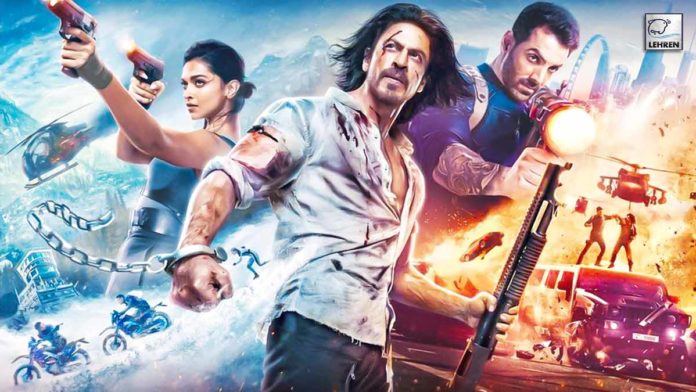 Pathaan is a spy thriller film featuring Shah Rukh Khan, Deepika Padukone and John Abraham. It is directed by Siddharth Anand and produced by YRF.

You can quibble that Yashraj is serving its favourite aman ki recipe again.

You can quibble that Shah Rukh Khan is ageing, so is Salman.

You can quibble that Deepika’s bikini has more material than director Siddharth Anand’s muslin-thin story.

You can quibble that there are so many flashbacks, it’s confusing.

To address each quibble:

YRF does put on its menu an unabashed aman ki recipe. The ‘Rathore from RAW and Zoya from ISI teaming up’ theme from the Tiger series continues. This time it’s Jim (John Abraham), a disgruntled Indian officer who’s gone rogue while Pathaan (Shah Rukh Khan) from the Indian side and Dr Rubina Mohsin (Deepika Padukone) from ISI are the saviours with a bit of help from our very own Tiger (Salman Khan) and verbal references to Kabir (Hrithik Roshan from War). RAW and ISI joining hands is Aditya Chopra’s favourite staple for his Spy Universe, his answer to Rohit Shetty’s Universe of Desi Cops. Ah, yes, the Indian forces also wash their hands off their officers in trouble. It happens more than once in YRF’s Spy Universe.

Yes, Shah Rukh is ageing, so is Salman. Those unruly locks also don’t help Pathaan look anywhere near natty. But there’s more dance and fight than romance and the Khan duo’s screen charisma hasn’t faded. When they team up to fight, the adrenaline in the audience is palpable. And when they themselves are cheeky about how long they’ve been around (lines written into the film as a fond finale), it brings a smile, not a scowl to the face.

True, there is barely a plot as fights and thrills punctuate the war to stop the baddie (Indian, of course) from unleashing a mutated smallpox virus on targeted cities of our country.

For sure, ‘Besharam rang’ and ‘Jhoome jo Pathaan’ (Vishal-Shekhar) are a mash of tunes heard before. But they’re packaged with style, giving them a new energy.

One does yearn for The End, one can catch 40 winks before the interval and during the prolonged climax between Shah Rukh-John when editor Aarif Sheikh seems to have gone to sleep instead of working the scissors. But the fights and thrills are massy, there’s variety out there. Dangling from choppers, mobike chases, skating, on snow, land, sea, air… They pack a punch.

Certainly, there are so many flashbacks in Shridhar Raghavan’s screenplay that it’s tough to keep track of where and who Pathaan is fighting. But with so much action going on, there isn’t much time to ponder over mundane questions.

Yes, it’s not blockbuster material. Yes, it’s larger-than-life heroism where Pathaan knows every inch of Russia but not a word of the language. But the making is spectacular, the cinematography (Satchith Paulose) as widescreen awesome as any Bond movie.

Top all the stylish action with swagger in the dialogues (Abbas Tyrewala). A beaten up but ballsy Pathaan says through his long locks, “Hindi” when he makes his entry with people around chattering in a foreign tongue. Or him signing off saying he ain’t gonna cut his locks but…We’ll let you smile when you hear that line.

With Pathaan and Tiger joining forces, YRF’s Spy Universe is here for more editions of action and the aman ki recipe.

It WorksReview | Pathaan: It Works