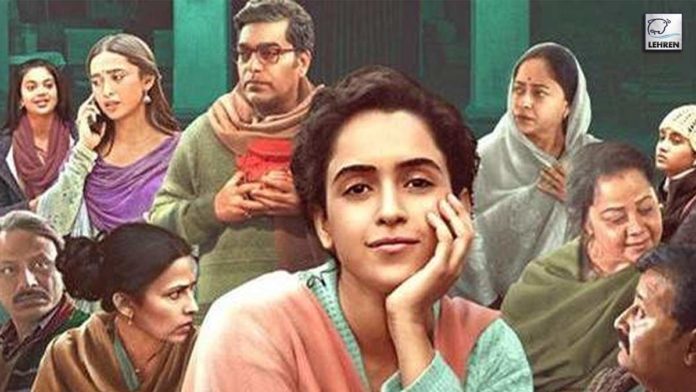 Critic review for the movie Pagglait streaming on Netflix – starring Sanya Malhotra, written and directed by Umesh Bist and produced by Shobha Kapoor.

The grief of ageing parents who’ve lost their young son is perhaps what gives it the whiff of Mahesh Bhatt’s finely made 1984 film, Saaransh. But the ambience is much like actor Seema Pahwa’s directorial debut Ramprasad Ki Tehrvi, a tragi-comedy where unresolved issues surface during the 13-day rituals following the death of the family patriarch.

In Umesh Bist’s well-written, well-layered and well-filmed Pagglait (Crazy) too, human equations are prime as a family comes together for 13 days of mourning. But he weaves it all around the freshly widowed Sandhya and her gradual awakening, almost like a rebirth on the 13th day.

Sandhya who strangely stays unaffected by the sudden passing of Astik, the husband she barely knew. She didn’t know what his favourite colour was though his wardrobe was splashed with it, and she didn’t know about a past he had not shared with her.

Astik was the pillar his parents leant on. But assembled below is an assortment of relatives who have motives far removed from mourning the dead. Motives that rear their head as insurance money, bank loans and beneficiaries come into the fray. Her own parents who had fixed the arranged match for her swing from insisting that she stay with her in-laws to, “Let’s go home, beti.”

Hindus believe that the soul hovers around until the 13th day when it takes leave of its earthly ties and melts into the cosmos.

Umesh neatly bricks his narration to level a set of relationships, one at a time, day by day. Relationships that revolve around Sandhya until, like her dead husband whose soul is liberated on the 13th day, she deciphers how her spirits should soar.

There’s sophistication in the writing as Bist does away with explanations of how or why the 20-something husband, wedded for barely five months, suddenly expired. There is not even the mandatory glimpse of the deceased, no photograph on the wall with a garland around it. There is just a hint that perhaps he agreed to the arranged match on the rebound.

But Bist does give in to the obligatory presence of an understanding old dadi (grandmother), a cuteness quotient that has become inescapable in many a family affair. And, like an old Hrishikesh Mukherjee film, he calls the house where much resentment resides, ‘Shanti Kunj’.

Without a doubt, Netflix’s fascination with ‘exotic’ Hindu customs and rituals continues, a premise such as this potent with possibilities. Bist also plonks the irresistible element of a Muslim in this house of mourning to showcase the intolerant Hindu.

But there is progression in Sandhya’s story as all that’s going wrong corrects itself ultimately. And, fortunately, unlike the flippant-sounding title, there is depth in this pagglait’s human equations.

The writing and the nuanced characterisation help Sanya Malhotra become an effective Sandhya. Support comes from a splendid array of character actors especially Sheeba Chadha and Ashutosh Rana as the parents who truly grieve the passing of their son without getting maudlin.

Some of the dialogues have freshness. When a surprised relative wonders how ‘Muslim’ Nazia, Sandhya’s friend, can be a vegetarian, she pertly replies, “Every Tendulkar is not a Sachin.” And, justifying the title, Sandhya drops something like, “A woman who becomes wise is called crazy”.

Finally, don’t miss that casual farewell touch of Sandhya’s rickshaw being driven by an elderly woman in that small North Indian town.