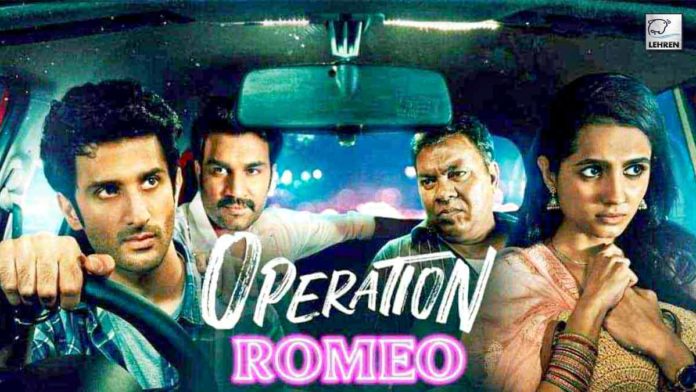 Taking off from last year’s Malayalam film Ishq Not A Love Story, misplaced manliness gets its comeuppance in a neatly wrapped up story by Ratheesh Ravi with an average screenplay by Arshad Syed.

A rap on the knuckle for moral policing climaxes with a slap on the myth of manliness.

When college student Neha (Vedika Pinto) greets her parents with ‘Khamma Ghani’, director Shashant Shah quickly establishes that she’s from a conservative Marwari family that will frown upon her romance with Adi (Sidhant Gupta).

Without much of a fuss, Shah also sets Adi in a normal Mumbai family with a mother and sister who get a whiff of, and are comfortable with, what’s brewing between him and his girlfriend.

At this stage, since the romance is already in place, there really was no need to have a montage song that lingers on Neha-Adi except to prolong the running time of the film.

For the couple that hasn’t even kissed, a nightlong drive on her birthday when Adi wants to spring a surprise on her, turns into a night of trauma. It’s startling when Mangesh Jadhav (Sharad Kelkar) and Patil (Kishore Kadam) suddenly charge at them for a spot of moral policing that teethers towards lascivious behaviour.

Arshad Syed’s writing is very obviously calibrated in the way he sets up a premise to feed off it in a later sequence. Three come to mind right away. One, in a restaurant scene where a man from another table leers at Neha and in the car when Adi goes silent over a red rose she’s received from someone, is an in-your-face setup for the extent to which he’ll go as a possessive guy. The second is the calculated reference to Adi being clumsy at reversing the car which is put in only to justify his inability to reverse and speed away from the self-appointed moral police. It’s obvious because soon after it’s done with, Adi has no problems angrily reversing and driving away from Neha when he drops her after the night of trauma.

The third is the introduction to Mangesh’s wife (Bhumika Chawla) as an upright woman in her workplace which helps when Adi extracts his revenge on her husband. She is horrified by what Mangesh has been up to with Neha.

But setups and pay-offs are a part of all cinematic writing, so it’s acceptable. Except that it would help not to make them stick out so obviously.

You also wonder at the restaurant scene where switching places with Neha would have been the most sensible solution when someone gawks at her.

There are also loose moments on the night of the trauma. After picking a secluded spot at 2 am, why Adi would leave her in the car when he goes to pick up something from a shop; why she couldn’t go with him to the ATM instead of being left alone with the two strangers; why he couldn’t drive away (even without reversing) to a more crowded spot, make it convenient direction by Shah just to establish the right eerie ambience.  But we accept that there is something called presence of mind that could desert a person when caught unawares. Besides, the director had to show that this couple had no way out of their trauma except to meekly comply. And all because they’re afraid of what her parents would say if they found out about her friendship.

But once I’m done with my griping about the route taken, let me also applaud the final destination where the conservative Marwari girl takes a backseat and in the fore is a young woman who won’t stand for Adi’s interpretation of ‘manly possessiveness’. That’s when you say, ‘Atta girl’ and endorse what the film wants to say after all.

A round of applause for the acting crew too. Sidhant Gupta makes a charming hero with a cleft in his chin, a pleasant face and easy skills as a performer. Vedika Pinto is also a refreshing face. Sharad Kelkar who has the most substantial part that calls for a gamut of expressions aces it while Kishore Kadam and Bhumika Chawla pitch in with the ease of veterans. Let’s use another finger to sum it up: Operation Romeo gets a thumbs up.