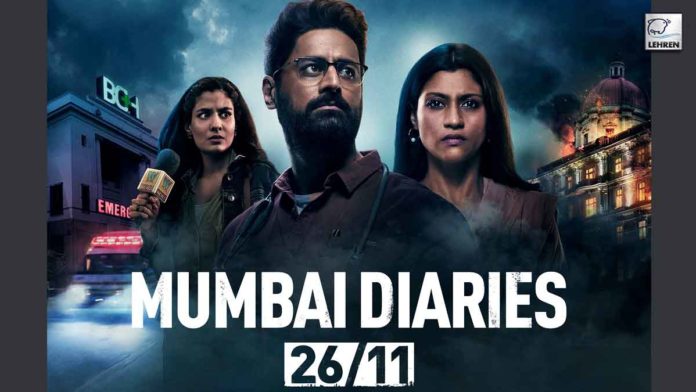 Tall, dark, handsome and dedicated to saving lives. As Dr Kaushik Oberoi (tall and impressive Mohit Raina) puts it, doctors save lives, they don’t judge the character of the patient.

And so, when it’s too late to save the ATS Chief from the inevitable as he bleeds to death, but succeeds in saving a terrorist, the doc’s put in the dock.

Media fiend Mansi (Shreya Dhanwanthary) who’s on the hunt for a killer story amidst the chaos and killings of the terror attack of 26/11, shadily moves around the hospital with impunity, sending off ‘exclusives’ and ‘breaking news’ that slam the doctor. As if being slapped by the ATS Chief’s wife and having Inspector Mayank Bhat (Akshar Chetan Kothari) and sundry others in uniform put a gun to his head wasn’t enough for Oberoi to endure in one night.

A handler in Islamabad getting information from our ill-advised media anchors who supplied the world with vital intelligence on the counter moves of our security agencies, was a fact. A swank luxury hotel, one of the main targets of the Pak-planned attack, with staff that went beyond duty even as VIP guests threw tantrums, was real. Jeeps spraying bullets from AK 47s on the roads of Mumbai and throwing grenades, was real. Terrorists moving into a hospital near VT which threw cops and docs together to face the fire, was real.

Factual terror mingles with fiction over eight stretched episodes as directors Nikkhil Advani and Nikhil Gonsalves, along with writers Anushka Mehrotra and Yash Chhetija, bring a whole lot of fictional characters into the real situations to retell 26/11 as a horror and human drama. It’s an interesting mix.

In the space of one dastardly night, a spate of issues arise and get resolved. Social Services Director Chitra Das (Konkona Sen) and trainee doctor Sujata Ajawale (Mrunmayee Deshpande) have lived with the claustrophobia of gender discrimination but succour arrives when, at the end of the bloody battle, they get their applause for a job well done. “Never heard those words before,” says one. “Be a woman and do what it takes,” says another to a man. Turning the age-old, ‘Be a man’ on its head. Nice.

Trainee doctor Ahaan Mirza (Satyajeet Dubey) has to keep visiting communal prejudice, especially after he’s the one who translates a terrorist’s Arabic spouting on jihad and his God. That’s overcome too, on 26/11.

Sorted out by the happenings of the night are also dad-daughter issues between the much-celebrated Dr Pranabh Parekh (Indraneel Bhattacharya), stuck with wife at a high-end soiree at the hotel, and his daughter Diya (Natasha Bharadwaj), a hyper, much-entitled intern at the hospital. It’s hotel executive Ananya (Tina Desai) and her efficient handling of the situation that finally prods Pranabh into getting over his prejudice against women.

Ananya at the hotel and her husband Dr Kaushik Oberoi at the hospital have couple issues. Tick it off, man, nothing like a night of terror to bring the estranged together.

Inside the hospital, when Kaushik isn’t being scolded for doing whatever it takes to perform a surgery even without an OT or without an anesthetist, he takes a swing at colleague Sahil (Mishal Raheja) for a misunderstanding over Ananya. But when they battle terror shoulder-to-shoulder, all will be well.

It was terror alongside humanity, as Mansi finally concludes.

Hovering over an assortment of doctors, nurses, patients and cops, and doing a balancing act to keep the rescue going is Dean Dr Subramaniam (Prakash Belawadi). ‘Time of death’ is a daily reality. An ageing patient who has occupied a bed for ages with the staff treating her like family, is a familiar sight.

The media losing sight of responsibility in its misplaced enthusiasm for breaking news is a reality we have to correct. Therefore, Mansi going overboard and then finding her conscience is a welcome touch.

The scenes of terror unleashed on 26/11 and the hospital-hotel scenario give the feeling that this really happened.

But a terror attack cannot ever be portrayed without the mandatory lectures on Islam being a religion of peace. At the end there’s even a press cutting of Muslims donating blood for the victims.

I’m all for balance and amity. But when Nikkhil likens the 1984 Sikh riots to 26/11 as if to say that Hindus went on a rampage killing Sikhs the same way as terrorists wreaked havoc in our country, perhaps the makers need to be reminded that Hindus did not kill Sikhs. It’s recorded history that only one unhinged political party did that. Nor were there any religious slogans when Sikhs were brutally massacred in the aftermath of Indira Gandhi’s assassination.