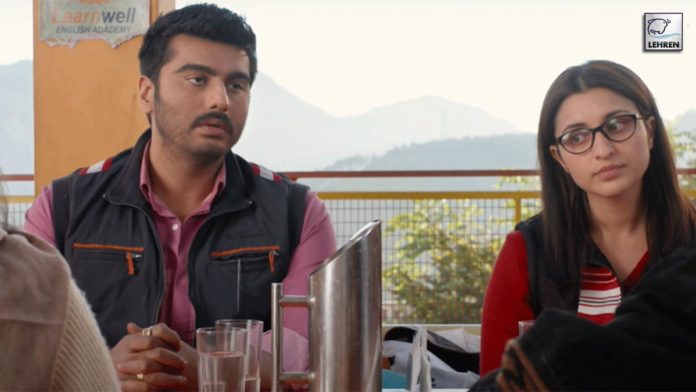 When a banner like YRF waits for one year to stubbornly release its new film only in theatres, there is a chance that maybe such a professional outfit knows what it’s doing. But after braving it to the theatres despite the rising cases of the virus in Maharashtra, what’s clear is that this filmmaking banner won’t be able to answer why it continues to blindly back an effete director like Dibakar Banerjee.

With a total of 7 people in the auditorium, the State government will also be unable to answer why it insists on keeping movie halls open when the pandemic is not fully under control. Is drowsy cinema like Sandeep Aur Pinky worth the risk?

If this was supposed to be an updated edition of YRF’s 2005 entertainer Bunty Aur Babli, then clearly, someone at YRF forgot to vet the tiresome Dibakar-Varun Grover script.

Sandeep by the way is the female, banker Sandy Walia (Parineeti Chopra), and Pinky is the male (Arjun Kapoor), the pet name for hatta-katta Punjabi boy Satyendra, a suspended Haryana cop. How did the writing team come up with something so funny? Going by the calibre of the team, I do hope they get it that this is not a compliment, it’s something called sarcasm.

Sandy’s pregnant with her boss’s child but she’s part of a big bank scam and the boss wants her eliminated. Pinky’s been sent to do the job but his boss Tyagi (Jaideep Ahlawat) is quite okay getting him gunned down too. The two who escape an encounter killing by centimetres, reach a small town near the Nepal border.

Convoluted in its narration, bullock-cart slow right from the start and as unrefreshing as a pre-Covid newspaper, Dibakar actually uses the outdated ruse of getting Pinky to cross-dress to escape under Tyagi’s nose.

Arjun Kapoor, too chubby to pass off as a lithe dancer, Parineeti Chopra who looks as pale as a pregnant woman (not be design) and Jaideep Ahlawat springing no surprises, are unable to elevate the weak foundation with their uninspired performances.

At the end of a ride that has neither romance, humour, music or the thrill of an adventure, the question remains, why YRF, why did you make this film?