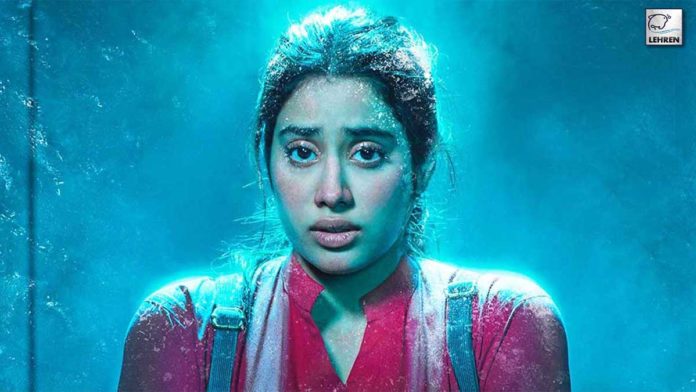 The remake of Helen, a 2019 Malayalam survivor thriller, director Mathukutty Xavier works with screenplay writer Ritesh Shah to shift base to Dehradun and serve it anew for a Hindi audience.

He doesn’t deviate too much from the original as nursing graduate Mili Naudiyal (Janhvi Kapoor) grapples with the English language before going to work in Canada, holds a parttime job behind the counter of Doon’s Kitchen in a local mall, turns up punctually to give injections to neighbours, has a great bedside manner and has a cheerful smile for all, including the security guard. She even befriends a little rat.

At the workplace, the manager of Doon’s Kitchen (Vikram Kochhar) is a bit of a bully. But not quite a villain.

There’s a warm father-daughter equation that’s established as Mili keeps a strict vigil on her dad (Manoj Pahwa) with much friendly banter between them.

In its tone, it takes off resembling Jaya Bhaduri who played a chatty, friendly Mili in the 1975 Hrishikesh Mukherjee film, right down to the peppy father-daughter relationship she shared with Ashok Kumar. But the resemblance ends there.

Before Mili of Dehdradun goes missing one night and is unreachable on her phone, Xavier sets up a sequence of events.

Her father’s miffed with her when he finds out that she’s been keeping boyfriend Sameer Kumar (Sunny Kaushal) a secret from him.

And she’s been frosty with Sameer all day.

So when Mili finds herself locked inside the freezer, nobody knows where she is.

Following the trail of other survivor tales like Trapped, the 2016 Rajkummar Rao film, or Danny Boyle’s 127 Hours which was a true story, Mili has to gather her wits, her grit and her nursing skills to keep hypothermia at bay and stay alive.

Outside, her father, friends, colleagues, the cops and Sameer don’t even know where to begin looking for her.

One, the Malayalam original had Helen’s father frowning upon her friendship with a Muslim boy.

Mili had no credible reason for keeping her father in the dark about Sameer. A passing reference to a caste difference or trying to insert dialogues about Sameer being jobless and irresponsible don’t land well enough as substantial reasons.

Two, there’s no plausible reason for an unnecessarily aggressive cop (Anurag Arora) to go out of his way to stymie the search for Mili.

Three, there’s no nail-biting thrill or anything that would add up to repeat value.

But Jahnvi Kapoor makes Mili endearing and vulnerable, a performance rendered with integrity. Although this is Mili’s show, Sunny Kaushal is charming as Sameer with Manoj Pahwa, Anurag Arora, Vikram Kochhar and Sanjay Suri (as a senior cop) giving polish to the cast. Jackie Shroff also springs a welcome surprise in a brief guest appearance.