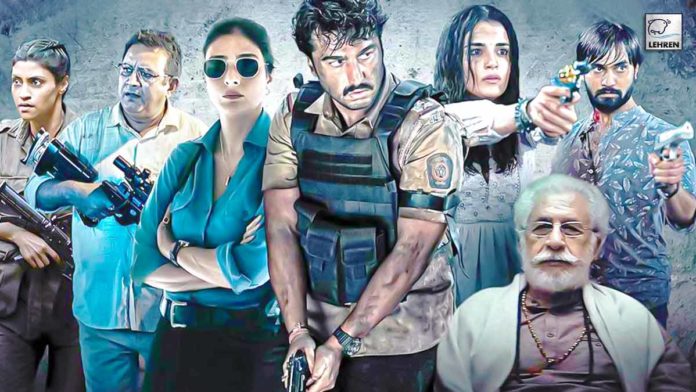 Vishal’s noir cinema has few takers at the box-office, ditto for Arjun Kapoor (playing Gopal, a brazen corrupt cop). It’s thus commercially slippery ground for young Aasmaan but there’s a confidence in his writing with a feel for raw humour. A very slim percentage of a young audience may find its way into the theatres to watch it.

Everybody’s a kutta, spits communist rebel Laxmi Bomb (Konkona Sen Sharma) right in the prologue where she narrates the story of a lion, a goat and a dog while justifying her violent rebellion for azaadi.

There are a lot of dogs in the screenplay looking for a bone.

Paaji (Kumud Mishra) veers between loyalty to uniform, the draw of greed, the distaste for injustice and the call for azaadi.

It’s quirky. When a chapter reads, ‘Sabka Maalik Ek’, it takes the Commissioner’s current fancy, Pammi the Madam Sir, to put one finger up to explain the title. Everybody wants a khoka, one crore, each for a different reason.

Pammi has the best presence, crude and funnily easy with her ‘Logic ki maa ki aankh’ and her narration of a killing on a commode with suitable noises accompanying it.

She wants a crore. So do Gopal and Paaji. So do lovers Lovely (Radhika Menon, a don’s daughter) and Danish (Shardul Bhardwaj), her father’s sidekick.

Ex-cop Harry (Ashish Vidhyarti) who runs a private security firm for ferrying huge amounts of cash to ATM machines is written in solely to provide a spot for all the disparate desperadoes to converge with a spray of bullets ending in a classic shootout.

The background music that emanates from Vishal Bhardwaj and team is like the theme, lively and irreverent.

The writing (Aasmaan with additional screenplay by Vishal) is interestingly layered. From a Coke-Pepsi-Fanta dialogue to the Moong ki dal WhatsApp group, even all the alphabets of abuse in Hindi, there’s a lightness in the rawness.

The performances are a hoot. Tabu tops it as Madam Sir, slipping into the badass-in-khaki-vardi with experienced ease. Arjun Kapoor is likeable too as Gopal and Kumud Mishra owns Paaji. Several other actors like Konkona, Ashish and Naseeruddin Shah as the don in a wheelchair are underused, clear additions only for star value.

While it takes more than half the film for the chapters to take the story forward, there is an intrigue, a small desire to stay on and see what it’s all about, what’s going to happen next.

If you watch it with a smile at the general irreverence and the story of greed peeled away in layers, it is entertaining.

But if you ask yourself, was the wait worth it, the answer would be, no, there are loose ends. Where it all leads to is ultimately pointless, irrespective of an ending that brings a smile.

There’s also an irritation over a fable just popularised by Alia Bhatt’s Darlings. Darlings got a head start over Bhardwaj as the frog and the scorpion fable, the same parable, the same moral at the end of it, is the backbone of Madam Sir’s “Logic ki maa ki aankh, ye mera character hai.”

The influences on the young director are clear. Aasmaan Bhardwaj will grow up when he finds his own ground.