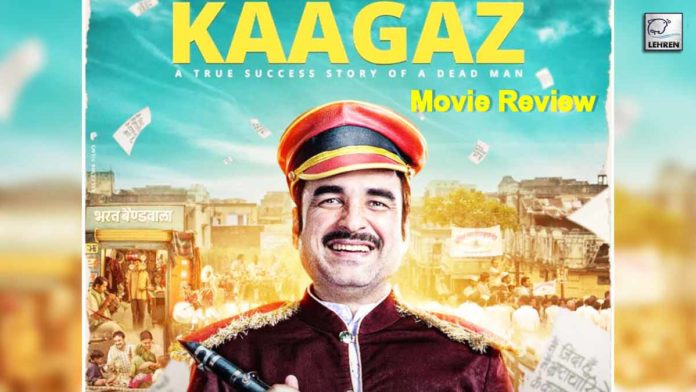 When Pankaj Tripathi, this season’s most popular actor, was asked what his dream biopic would be, he replied that his dream had already come true. Pankaj had yearned to play a common man and he disclosed that working in Satish Kaushik’s biopic of farmer Lal Bihari Mritak had fulfilled his dreams.

It is an astonishing and yet sadly common tale of how a man discovers one fine day that he’s been declared dead in government records to facilitate the fraudulent takeover of his land by unscrupulous family members. In the film, it’s contented bandmaster Bharat Lal of Azamgarh district in UP who chances upon his ‘death’ when he seeks a bank loan to expand his band-baja, goes to his family home to get the papers of his ancestral property and is driven out by his chacha-chachi and cousins who have declared him dead and grabbed his land.

Back home, his dilemma evokes black humour at first when friends, and even his wife Rukmani (Mona Gajjar), make small digs that he’s been officially declared a living ghost. The village kids chuckle and call him bhoot chacha.

But it gets serious when nothing in the system, from the sarpanch to the Chief Minister, the courts, global media attention and the Legislative Assembly, can correct a blatant wrong. With even routine work slipping away, at one point Bharat sends his wife to apply for a widow’s pension since he’s supposed to be dead. But since he’s alive, she’s booted out of the sarkari daftar. That’s how the system works – Bharat Lal can neither get the benefit of the living nor of the dead.

A story that began in 1977 takes over a decade to finally resolve itself. Years filled with frustration and humiliation and being labelled a lunatic for his desperate measures. It should be disturbing that Lal’s real-life trauma is not an isolated case. The All Indian Association of Dead People or Akhil Bharatiya Mritak Sangh that he founded in despair is a reality.

Unfortunately, none of the poignancy of such a pathetic situation lands as Satish Kaushik’s story-telling is woefully outdated, outlandish and overstretched. There’s even the antique addition of an item number by Sandeepa Dhar (pretty but unnecessary). Such unfashionable cinema renders improbable and implausible a relevant issue. When his distress caught media and political attention, why on earth would it be impossible for anybody to resolve?

A crisper and slicker narrative may have driven home the point especially after the lightness of the good-hearted bandmaster’s opening scenes, like his conversation with a mouse, gives way to the maudlin heaviness of the theme.

Pankaj Tripathi’s current popularity, coupled with his proficiency, is perhaps the only draw. But to keep attention riveted in such unwatchable circumstances is not a task as light as kaagaz.