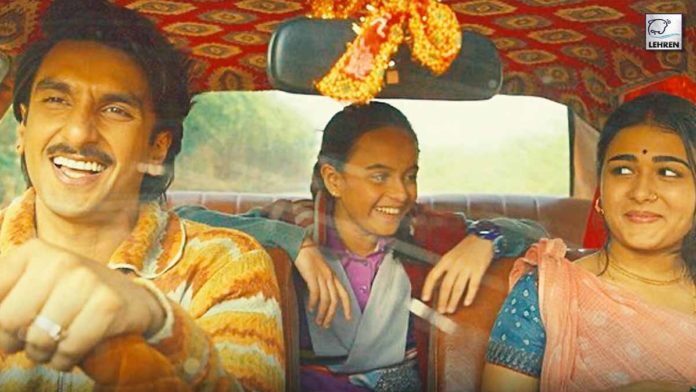 Writer-director Divyang Thakkar may be on debut but what’s the matter with veteran Aditya Chopra?

Doctors announce, ‘Jai Shri Krishna’ or ‘Jai Mata Devi’ depending on the sex of the child.

A red laddoo or a different colour drops according to the gender of the foetus.

Cramming such inanities with a truckload of timeworn superstitions, the YRF banner puts the tragic-vital premise of sex determination tests and foetus killings through the wringer with weak-kneed comedy. There’s something inherently enervating with the way the film production company has rolled out this script.

A waaris for the parivar (a successor for the family, male of course) is the topmost thought on the minds of Pravingarh’s sarpanch family as Mudra (Shalini Pandey) groans during her sixth abortion.

Only husband Jayeshbhai (Ranveer Singh) is sensitive to the doctor’s warning that repeated sex-selective terminations are weakening Mudra.

With father (Boman Irani) and mother (Ratna Pathak Shah) dead against a ‘Ghagra paltan’ (a platoon of skirt-wearers) in the family, Jayeshbhai hatches a harebrained scheme to save Mudra, their older daughter and their unborn little girl.

Somewhere in Ladhopur, Haryana, Puneet Issar and a sea of muscular men are all unmarried because theirs is a village without women. The men await the arrival of families with women and normalcy.

That’s where Jayeshbhai wants to head.

It’s a bumpy route that Devyang charts, wanting to cram in a myriad social comments. Like the satta saathi agreement between families which is, “You give me your daughter and take mine for your son. I’ll give you my son and take yours for my daughter.” It’s supposed to be a fair exchange that takes care of dowry and is supposed to be an insurance that your daughter will be treated the same way you treat our daughter.

Or like the scene where a girl in the village has been stalked. The sarpanch rules that girls should stop using perfumed soap which drives the boys crazy.

Devyang brings in every conceivable social issue and turns it into bizarre comedy which doesn’t even land.

In the great escape from patriarchy, he brings in a dhabbawala’s Bengali wife, moves to the song, ‘Angrezi mein kehte hai ki I love you’ and then to ‘Monjolika’ from Bhool Bhulaiya, all of which have neither anything to do with the main tale of gender killing nor tickle you in any way and should never have made it to editor Namrata Rao’s cut.

With serious issues of patriarchy, foetal terminations, a second marriage for Jayeshbhai and wives without a voice, Jayeshbhai lectures the village on the need to give and take a puppy (a kiss). Like that’s the one matter of utmost importance. After one delivery, six abortions and another pregnancy, Jayeshbhai himself has never puckered up with his wife.

Is this entertainment or philosophy or just a puppy dog scratching out a screenplay?

As for inconsistencies, one loses count. In a world where the girl child is unwanted or muffled, Jayeshbhai’s older daughter is so annoyingly adult, tech savvy and worldly wise that it’s incongruous.

With general patriarchy and suppression of women seeped deep inside a society where a prospective young bride believes she must be in the wrong if her husband beats her up, the unbending sarpanch taking his daughter back home is at odds with all that he stands for.

After Jaya Bachchan went through buckets of tears and a lifetime of silence before she finally said, “Bas, bol diya,” in Kabhi Khushi Kabhi Gham, every film has women waking up at the end to reset the gender balance that’s gone askew. Predictably, Ratna Pathak Shah does it too, lethargically and so late into the day that there’s little energy left for any cheering.

There are some small likeable touches like Mudra being asked to put her thumb impression on a paper when she kneading dough, a bit of flour mixing with the ink.

Or the ghunghat flying when she’s driving and feeling her first taste of freedom.

Ranveer Singh has been prematurely anointed a chameleon because this time around, he fails to nail Jayeshbhai. Effete with neither brawn nor brain, it’s anything but a jordaar performance.

Also Read: Jayeshbhai Jordaar- NGO Files Complaint On One Of The Scenes From Trailer!