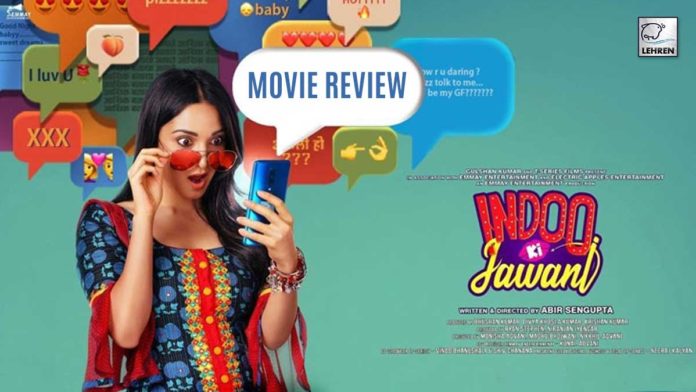 Indoo’s virginity is in danger. Everybody’s lusting after her, even the uncles who call her ‘beti’ want only to paw her.

The talk of the town is ‘meri jawani’, says Indoo with the come-hither looks. But she’s a good girl who won’t succumb even to her boyfriend’s advances. She’s saving herself up for marriage.

When her parents go out of town for her brother’s college admission and leave her alone at home, Indoo’s jawani is like a magnet. Her brother’s friend comes calling, claiming to be there to look after her, he’ll even stay the night with her to keep her safe. Opening the door and asking him to get out would have truncated the ‘sex comedy’, so the sequence plays on without the excitement of a climax.

Don’t ask why a girl who has the whole town panting for her can’t get a decent guy to date. Unquestioningly, watch Indoo opt for a dating app for a great intimate experience. Tinder turns to dating app Dinder, please laugh, this is a comedy. And by mistake, the ‘r’ in her name gets dropped and her handle becomes ‘India’ instead of ‘Indira’.

On the loose are not only everybody’s morals but a terrorist too.

‘All Pakistanis are not terrorists,’ is the wisdom expounded by both the film and by hero Samar. He’s a Pakistani in India who hooks up with Indoo through the dating app.

If he’s not a terrorist, who is?

There’s one song that sounds too much like ‘Badtameez dil’ to really count. And shot in Lucknow, the production values look like a quick attempt to avail of the subsidy offered by the UP government.

As the action weakly builds up, Hindu neighbours are busy with ‘Jai mata di’ sessions while the hero chases terrorists to save India and Indira.

‘India and Pakistan can be friends, it’s nosey neighbours who foul it up,’ runs the aman ki asha theme.

Director Abir Sengupta’s attempt is to be comic and patriotic.

Unfortunately, this sex comedy laced with cheap dialogues like boys are looking to ‘jhanda gaadna’,  arouses neither laughter nor your basic instincts. As for patriotism, the josh just doesn’t evoke a ‘High Sir’.