Hungama 2 Review: Chaos Is Not Comedy 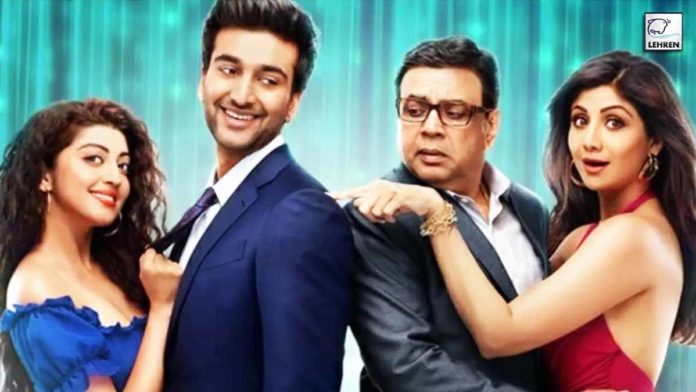 The premise of an ageing lawyer (Paresh Rawal as Radheshyam Tiwari) forever suspicious of his glamorous young wife Anjali (Shilpa Shetty) is a potent premise for comedy.

Alongside, a young woman (Pranitha Subhash as Vaani) turns up at the Kapoor mansion of the retired superintendent of Tihar Jail (Ashutosh Rana), claiming that his son Aakash (Meezaan Jaffrey) is the father of her little daughter Gehna. Vaani is clearly no vamp but her agenda is a question mark. That could lend an interesting twist or two.

Aakash is all set to wed the daughter of rich man Bajaj (Manoj Joshi) and the Kapoors go all out to hide Vaani and the child. The engagement that must happen without Vaani’s intrusion is another field that could have kicked off a laugh riot.
When Radhe stumbles upon the hush-hush talk of a child and thinks it’s his wife who’s pregnant with Akash’s baby, that too could have led to a lot of fun.
But between screenplay writer Yunus Sajawal and director Priyadarshan, they manage to complicate the chaos to such an extent that it ultimately builds into an overlong mess without mirth.

From Johnny Lever to Rajpal Yadav and Tiku Talsania, every actor known to tickle the funny bone, is put into the cauldron but Priyan is unable to stir them in the way he once used to. When linguistic caricatures are passe and incorrect, Lever is made to do a take-off on Bengalis. An unsmiling patriarch looking to discipline a bunch of little terrors at home, came and went with Sound Of Music in 1965. Priyan actually expects to raise laughs by having Kapoor hire Lever as yet another tutor for the unruly kids in the family. And after Lever’s exit, the screenplay forgets all about the terrors for a long time as the focus swings between Radhe-Anjali, Kapoor-Bajaj and Aakash-Vaani. An expected crack at calling them Aakashvaani is also painfully made.

If Priyan has forgotten how to prise comedy out of chaos, Anu Malik who once composed the chartbusting ‘Churake dil mera…’ also doesn’t sparkle with creativity anymore as shabbily composed and intrusively placed songs keep prolonging the narrative.

Somebody should tell Priyan that he’s outdated on several other fronts too. Being unfeeling about a toddler who is treated like a prop does not add humour to an already agonising story with nobody, not even ‘mother’ Vaani showing any sensitivity towards her. Television shots of Vaani being arrested that aren’t followed up or an unnecessary track of Akshaye Khanna also don’t add up to a nail-biting thriller.

Hungama means chaos but disappointingly, Priyadarshan who was once terrific at climactic mayhem, no longer has that fine comic timing.

So once again, the closure of theatres comes to the rescue of a producer. What would’ve got a tepid response in theatres is saved with a direct release on an OTT platform.

PS: Producer Ratan Jain gives himself a fleeting appearance in a club scene. Am glad at least he had fun with Hungama 2.